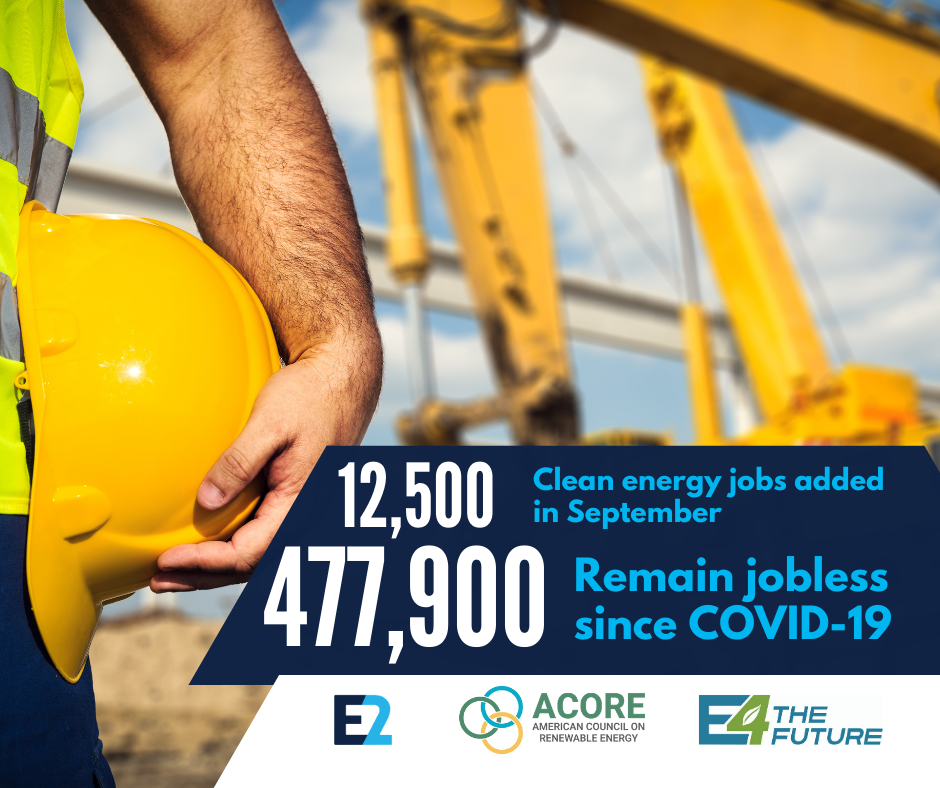 WASHINGTON (October 8, 2020) –  The clean energy industry expected to add over 175,000 jobs this year, but enters the final months of 2020 down 477,862 jobs as a stalled recovery plagues the sector. Clean energy saw 12,500 jobs added in September, leaving almost 14% of its pre-COVID-19 workforce unemployed, according to the latest analysis of federal unemployment filings prepared for E2 (Environmental Entrepreneurs), E4TheFuture and the American Council on Renewable Energy (ACORE) by BW Research Partnership.

Despite growing two times faster than the overall economy since 2017, the clean energy sector has been particularly slow to rebound compared to the nation’s overall jobs recovery. Jobs in clean energy grew by less than half a percent for the third time in four months and just one out of every five clean energy jobs lost between March and May has come back, according to the monthly report. The slow growth is consistent nationwide; no state saw more than a 0.7% increase in employment in September, with 23 states and the District of Columbia adding fewer than 100 jobs each.

While September showed some signs of national economic growth, alarming trends continued. Weekly unemployment claims remain at historic highs, and long-term and permanent unemployment rates have sharply risen since March. With federal Paycheck Protection Program (PPP) funds all but exhausted, and negotiations for an additional round of more targeted stimulus relief in question, more layoffs could be imminent.

Before COVID-19, nearly 3.4 million Americans across all 50 states and the District of Columbia worked in clean energy occupations, including renewable energy, energy efficiency, grid modernization, clean vehicles and fuels. That’s more people than work in real estate, banking or agriculture in the U.S., and three times the number of Americans that worked in fossil fuels, according to E2’s Clean Jobs America report.

“Continued paltry job growth and uncertainty headed into the slow winter hiring months confirms the need for federal clean energy stimulus. This won’t turn around by itself. Congress and the White House can’t keep pretending that it will.”

“It’s a painful reality that energy efficiency jobs are still down by 336,700 compared with January 2020 numbers. If this had been a normal year, the efficiency sector would have added about 30,000 jobs during this timeframe.”

“The hard-hitting impacts of COVID-19 continue to roil the renewable energy workforce. This report shows more than 75,000 renewable workers in America remain out of a job because of the pandemic. To keep that unemployment number from rising further, our ask to Congress is simple and urgent: We need temporary refundability for renewable tax credits so that projects can continue to be built in spite of a COVID-constrained tax equity market, and a delay in the scheduled phasedown of existing credits in recognition of the adverse nationwide impact the pandemic has had on the renewable sector this year.”

“The data show another month of anemic growth in the clean energy sector. Job growth will need to accelerate much more rapidly to get to ‘rebound’ territory.”

Energy efficiency continued to lead clean energy job growth in September, adding over 8,000 jobs. It was followed by renewable energy (2,273) and clean vehicles (965). No sector grew by more than 0.4%.

More than 40 states still suffer double-digit unemployment in clean energy, with six states seeing unemployment of 20% or more. Georgia continues to have the highest rate, with over 31% of its clean energy workforce still unemployed, followed by Kentucky at 28%. North Carolina led all states with the highest percentage of workforce growth at 0.7% while California again saw the largest total increase in jobs with 2,600 positions added (0.6%). No other state added over 1,000 clean energy jobs; only New York, Texas, and Illinois added more than 600. Ten states added fewer than 50 jobs each.

The data analyzed for this report did not include workers who had their work hours slashed and are now significantly underemployed.