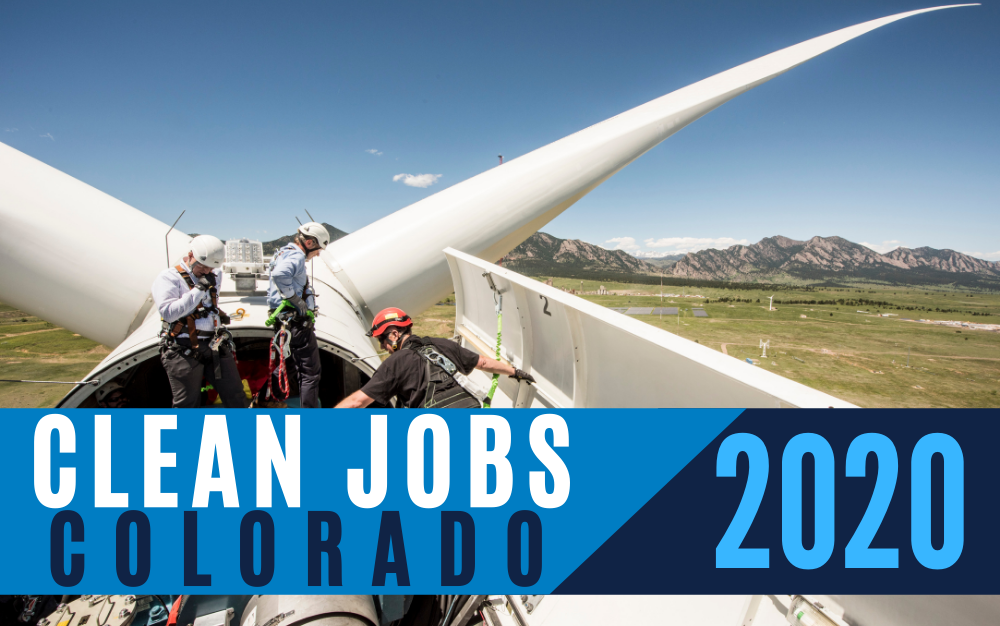 DENVER (September 9, 2020) – Led by strong growth in solar energy, grid modernization, battery storage, and energy efficiency, Colorado added 2,700 net new clean energy jobs in 2019, continuing a pattern of growth that made the state one of the fastest-growing for clean energy before the COVID-19 economic crisis, according to a new report from E2 (Environmental Entrepreneurs) and the Colorado Solar and Storage Association (COSSA).

62,420 Coloradans worked in solar, wind, energy efficiency, grid modernization, energy storage, clean vehicles and other clean energy occupations at the end of last year, according to the new report Clean Jobs Colorado 2020. That was up from 59,666 in 2018 and 56,993 in 2017, a rate (9.6%) twice as fast as overall employment growth in Colorado during that time (4.7%). Across the Mountain West no state employed more than Colorado, which accounted for 25.3% of the region’s 247,000 clean energy jobs.

At the end of 2019, clean energy employed more Coloradans than worked as registered nurses, waiters and waitresses, schoolteachers, farmers or bankers and nearly two times more than worked in fossil fuels (33,800).

This growth, however, has been upended due to the COVID-19 related economic downturn. Since March, Colorado has lost nearly 6,000 clean energy jobs according to a separate monthly report from E2. The losses represent 9% of the sector’s total workforce and wipe out the industry’s entire job growth since 2017 as office buildings and homes closed to energy efficiency workers; factories shut down for clean energy equipment manufacturing workers; and financing and supply chains issues sidelined solar and other clean energy businesses.

Despite this recent downturn, longer-term trends in Colorado’s clean energy economy, coupled with smart policies, offer the state various avenues to reclaim lost jobs, create thousands of new ones quickly, and speed the transition of workers whose industries were left exposed by the crisis, according to the report. Clean Jobs Colorado 2020 comes as the state is implementing promising policies such as the Zero Emission Vehicle (ZEV) standard and Governor Jared Polis’ Roadmap to Address Climate Change which can open up new opportunities for investments and jobs in clean vehicles, renewables, grid modernization, and energy efficiency across the state.

The report was released during a during a September 9 virtual briefing and panel discussion on the latest clean energy job trends and figures from the new report as well as the unemployment impact on the sector since the COVID-19 pandemic hit. The online event was hosted by E2 and the Grand Junction Cleantech Business Coalition. For more details on the briefing see here.

“Clean energy’s economic potential to Colorado remains incredibly high as the state continues to look ahead at recover and rebuilding in the coming years.

“Lawmakers have a responsibility to take advantage of one of the fastest-growing industries right here at home and put Coloradans back to work quickly in industries that span the state and will continue to grow and help Colorado compete at home and overseas for decades to come.”

“Despite ranking 21st in population for the nation, Colorado employs the sixth most wind and solar workers in the U.S. That strength across our renewable energy sectors has been critical during these difficult times.

“Many of our members want to get back to full employment quickly, but without the proper policies in place to support a recovery and protect them from future shutdowns it could be years. Lawmakers need to embrace clean and renewable energy as an economic-first policy to help Colorado grow out of this recession.”

According to the report, Colorado continued to outpace neighboring states in clean energy jobs in 2019, despite solid growth in Idaho, New Mexico, Montana, and Arizona. Only Nevada had a faster job growth rate in 2019.

Clean Jobs Colorado 2020 is the second iteration of the annual employment analysis. The report expands on data from the 2020 U.S. Energy and Employment Report (USEER) produced by the Energy Futures Initiative (EFI) in partnership with the National Association of State Energy Officials (NASEO), using data collected and analyzed by the BW Research Partnership. The report was released in March 2020 and is available at www.usenergyjobs.org. E2 and Clean Energy Trust are partners on the USEER, the fifth installment of the energy survey first released by the Department of Energy in 2016 and subsequently abandoned under the Trump administration.

Established in 1989, the Colorado Solar and Storage Association (COSSA) is the award-winning nonprofit association leading Colorado’s solar and storage industries. Our mission is to expand solar and storage markets and to generate jobs and prosperity for the people of Colorado. Together with hundreds of solar and storage business members we work to advance clean energy policies, remove market barriers, highlight emerging trends, and increase solar and storage education.