About 21,000 unemployed since COVID-19 but promising policies pave way for continued growth

RALEIGH – Led by strong growth in grid modernization, energy efficiency, and renewable energy, North Carolina added 1,800 net new clean energy jobs in 2019, continuing a pattern of growth in what has become one of the state’s largest employment sectors, according to a new report from E2 (Environmental Entrepreneurs) and the North Carolina Sustainable Energy Association (NCSEA).

Nearly 113,000 North Carolinians worked in solar, wind, energy efficiency, grid modernization, energy storage, clean vehicles and other clean energy occupations at the end of last year, according to the new report Clean Jobs North Carolina 2020. That was up from 107,000 in 2017 and 111,000 in 2018, outpacing overall employment growth in North Carolina by nearly 50% over the last two years. 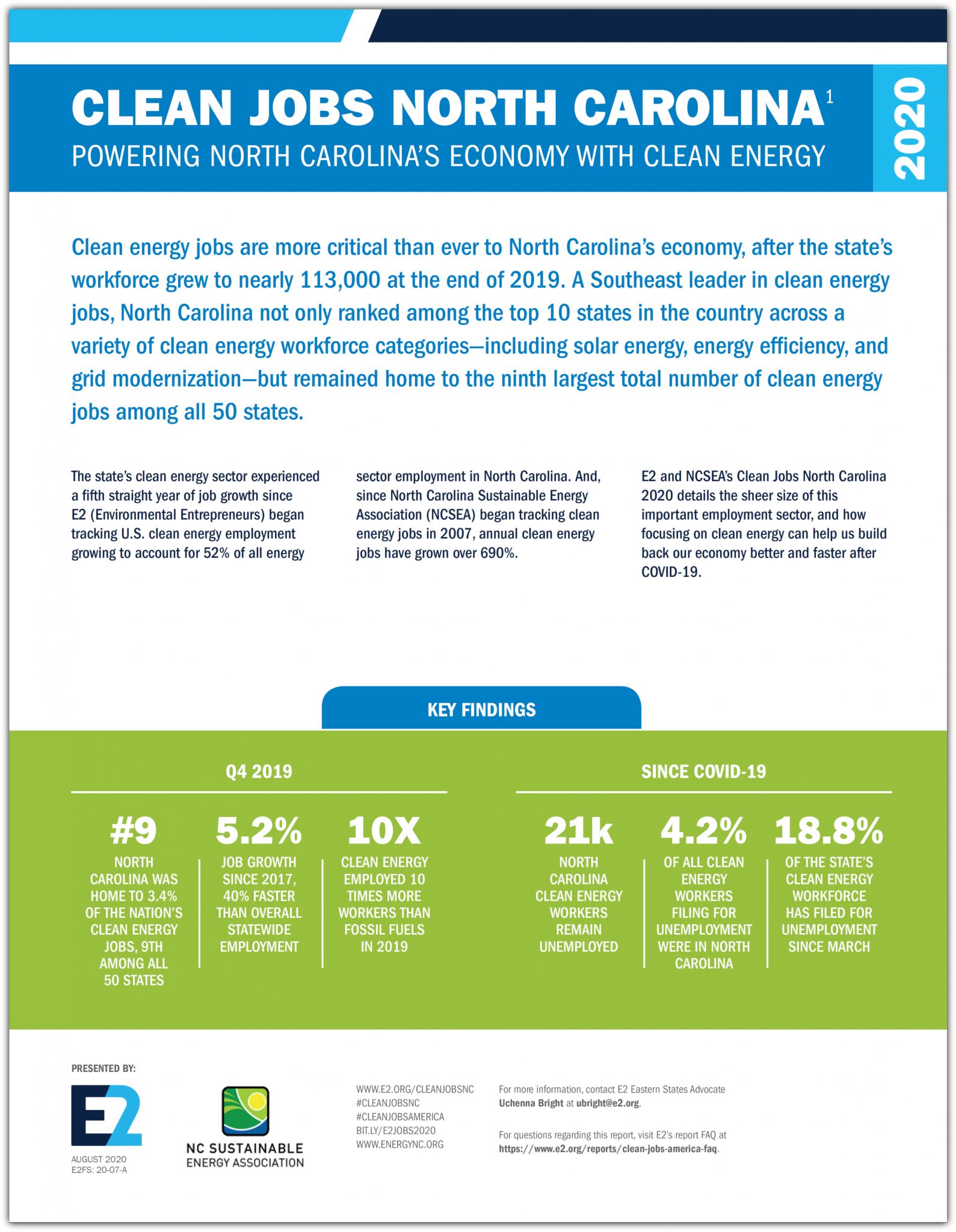 At the end of 2019, clean energy employed more North Carolinians than work as schoolteachers, farmers or bankers and 11 times more than work in fossil fuels.

The COVID-19 related economic downturn wiped out more than 21,000 clean energy jobs through July, however, as office buildings and homes were closed to energy efficiency workers; factories shut down for clean energy equipment manufacturing workers and financing and supply chains issues sidelined solar and other clean energy businesses.

Despite this recent downturn, longer-term trends in clean energy, coupled with smart policies, could get those workers back on the job quickly and keep the industry growing as the economy recovers, according to the report. Clean Jobs North Carolina 2020 comes as the state is preparing to implement promising policies such as Executive Order 80 and the Clean Energy Plan, which are expected to drive new growth, investments and jobs in solar, energy efficiency, electric vehicles and offshore wind.

The report was released as more than 400 North Carolina business, government and civic leaders are gathering virtually on Aug. 20 to discuss the state’s clean economy and how to keep it growing as part of the inaugural North Carolina Clean Economy Summit. The online event was hosted by E2 and co-sponsored by NCSEA, Research Triangle Cleantech Cluster, the North Carolina Outdoor Recreation Coalition, the North Carolina Justice Center, the Southern Alliance for Clean Energy and EVNoire.

Secretary of the N.C. Department of Environmental Quality, Michael Regan, will deliver opening remarks at the event, which will also feature interactive sessions focused on clean energy, clean transportation, and the outdoor industry, as the state seeks to build back a cleaner, more resilient and more equitable economy after COVID-19.  For more details on the summit see here.

“Despite recent setbacks because of COVID-19, North Carolina continues to lead neighboring states in the Southeast when it comes to jobs in renewable energy and energy efficiency.

“If we can implement the right policies, we can keep those jobs growing, helping power North Carolina back from the current economic downturn with clean energy that is good for our economy and our environment.”

“Clean energy has demonstrated time and again that it is an economic boon to North Carolina. The job creation, economic opportunities, and affordable energy offered by clean energy are more important than ever before.

“NCSEA is eager to continue working with a diversity of stakeholders to ensure that strong policies are in place to support North Carolina’s transition to an equitable clean energy future.”

According to the report, North Carolina continued to outpace neighboring states in clean energy jobs in 2019, despite solid growth in Virginia, South Carolina and Georgia.

Clean Jobs North Carolina 2020 is the second iteration of the annual employment analysis. The report expands on data from the 2020 U.S. Energy and Employment Report (USEER) produced by the Energy Futures Initiative (EFI) in partnership with the National Association of State Energy Officials (NASEO), using data collected and analyzed by the BW Research Partnership. The report was released in March 2020 and is available at www.usenergyjobs.org. E2 and Clean Energy Trust are partners on the USEER, the fifth installment of the energy survey first released by the Department of Energy in 2016 and subsequently abandoned under the Trump administration.