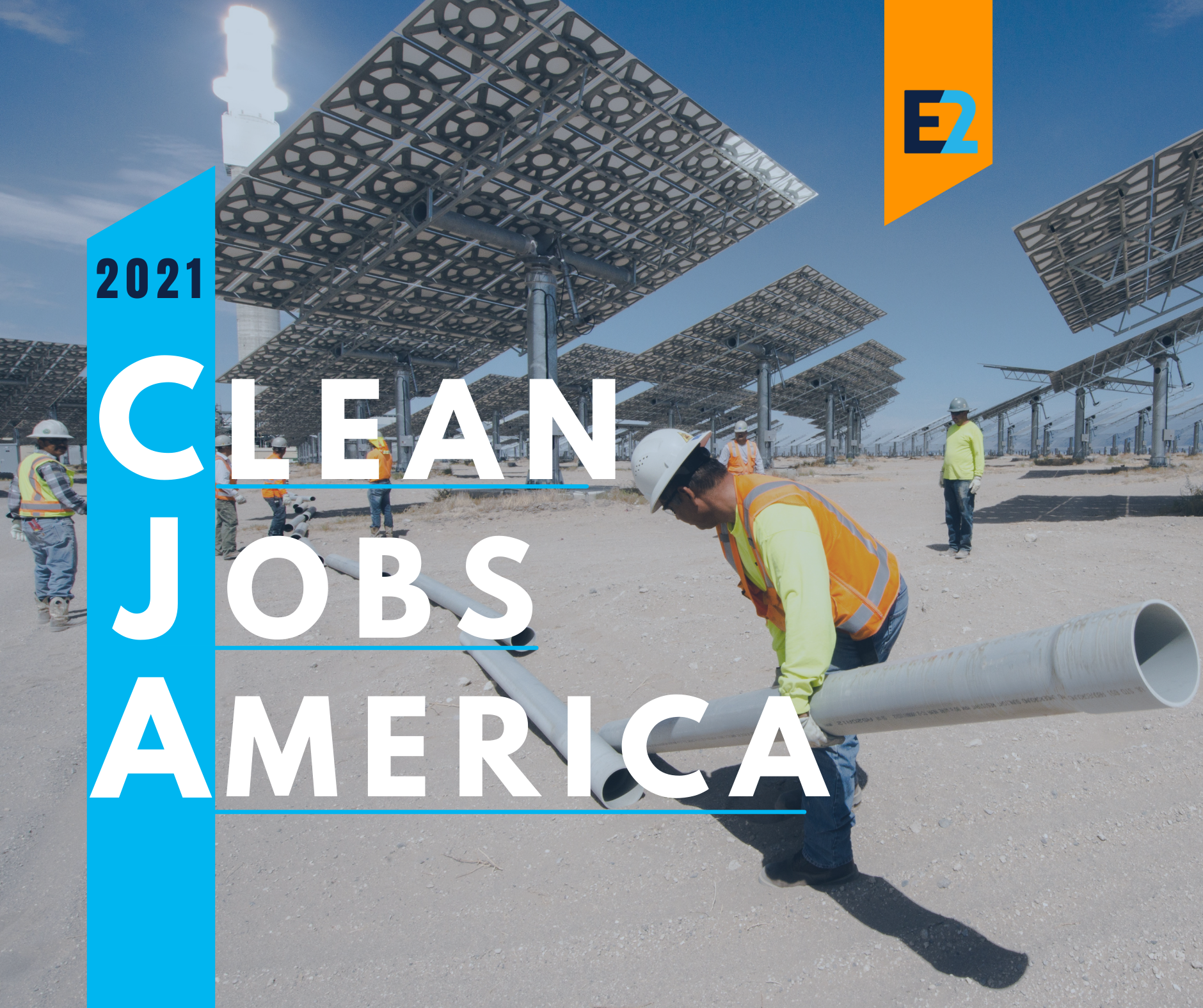 WASHINGTON, DC  – Clean energy jobs surged nearly 11 percent in the second half of 2020 to employ more than 3 million Americans across every state and nearly every county, according to the sixth annual Clean Jobs America report from E2 released today during a virtual press conference with U.S. Department of Energy Deputy Secretary David Turk. The report, released at the start of US Climate Action Week in Washington, DC., comes as the Biden administration prepares to host the April 22-23 Leaders Summit on Climate and Congress prepares to consider the administration’s American Jobs Plan infrastructure and clean energy package.

***Watch the  full recording of the April 19th press conference***

Like most of the economy, clean energy was hit hard by the COVID-19 pandemic and economic downturn in 2020. At one point more than 600,000 clean energy workers had filed for unemployment, but the sector rebounded strongly after May to recover about half of those jobs to finish the year down 307,000 clean energy workers. The decline in total clean energy employment was the first recorded since E2 began producing its annual Clean Jobs America reports in 2016.

According to the analysis, energy efficiency jobs saw the biggest drop, declining about 11 percent over the year as workers were prevented from entering homes and offices because of the pandemic lockdowns. Still, energy efficiency accounts for an even greater share of U.S. construction jobs, employing about one in every five construction workers nationwide. Other clean energy sectors also saw significant declines in 2020, including renewable energy (6 percent), grid and storage (7 percent), and clean fuels (7 percent).

Several clean energy sectors did see job gains in 2020,  including wind energy which added about 2,000 jobs. But the brightest spot was in manufacturing of electric and plug-in hybrid vehicles, where about 12,200 jobs were added as an increasing number of automakers announced shifts to producing 100 percent zero-emission vehicles.

Despite the setbacks, clean energy jobs rebounded quicker than overall nationwide workforce, according to the analysis. Clean energy jobs grew about 11 percent since May, compared to less than 9 percent growth in the national workforce during the same period.

Bob Keefe, executive director the national nonpartisan business group E2 said:
“Despite last year’s unprecedented decline, what the data shows is that clean energy is a job creator in every state and nearly every county in America. The message to members of Congress is that if you want these good paying jobs in your backyard, you need to support the policies on the table that are primed to turbocharge clean energy and keep it growing.”

Phil Jordan, vice president of BW Research Partnership, which performs the annual analysis for E2 said:
“The data show that while clean energy employment took a significant hit as a result of the pandemic, it has rebounded more quickly than many other sectors. Today’s report underscores the importance of tracking energy employment over time and demonstrates the importance of data-driven policy making to create jobs where they are needed most.”

See below for more quotes from clean energy businesspeople and organizations.

The analysis is based on preliminary employment data collected and analyzed by BW Research Partnership for the 2021 U.S. Energy and Employment Report (USEER, forthcoming). The USEER analyzes data from the U.S. Bureau of Labor Statistics (BLS) Quarterly Census of Employment and Wages (QCEW) to track employment across many energy production, transmission, and distribution subsectors. In addition, the 2021 USEER relies on a unique supplemental survey of 35,000 business representatives across the United States.

“My father founded my company over 40 years ago and we’ve been making homes more energy efficient throughout the Eastern Panhandle ever since. We are growing and will continue to grow because clean energy jobs are the future. In fact, there is so much potential for job growth in this industry that our biggest challenge is not being able to hire enough qualified workers.”

“In addition to being a major employer with potential for job growth, the clean energy industry employs more veterans than the national average. Federal investments in clean energy will also create jobs that support veterans and thus will pay dividends to our military families as they transition to civilian life.”

“I started with Harvest Solar in 2012 and there were just a small handful of us, trying to learn the clean energy industry and sell some solar and wind projects. We now have almost 100 employees, doing hundreds of commercial-scale solar projects for businesses and farms throughout Michigan and the Midwest. Yet we’re still only scratching the surface when it comes to job growth. Aside from direct construction and electrician jobs, clean energy projects create jobs in engineering, utility coordination, manufacturing, and much more.”

“When I started my company in 2004, we were one of the first to build solar in the Southeast. Now the solar and wind industry employs over 9,000 people and is a robust part of our region’s economy, especially in rural areas. North Carolina leads the nation in rural clean energy jobs. There is so much potential for clean energy to bring continued economic growth and job creation to our state in communities that need it most.”

“Many people don’t realize that the energy efficiency sector is one of the largest in the entire energy industry. This report confirms what we knew: our industry was hard-hit by COVID-19, and it provides all the more evidence that as Congress considers infrastructure and energy proposals, they must prioritize policies that get these displaced workers back on the job.

“But it can’t just be about recovery; we must focus on revitalization and a transition to a just energy economy. No other sector is positioned like efficiency to reduce carbon emissions and build back better: efficiency jobs are found in 99.8% of U.S. counties and more jobs were being added than any other energy sector prior to COVID-19. The policy solutions to reignite that growth are ready at hand, and it’s past time for them to be implemented.”

“As a partner with E2 on foundational research for Clean Jobs America, we understand how essential it is to clearly present well-researched data. Energy efficiency happens in buildings. Out of all clean energy job sectors, it was hurt most by the pandemic. The 2020 losses to the energy efficiency workforce were profound, but we are hopeful that we can make up lost ground quickly.

“The American Jobs Plan can provide a much-needed boost that will create good jobs, build more resilient communities, and improve our nation’s strength and health. Policymakers can trust the proven methodology behind the 2021 Clean Jobs America analysis, and put it to use making informed decisions.”

“Achieving corporate, state and national clean energy goals relies on a thriving clean energy workforce. The workforce contraction during COVID-19 is cause for concern and should spur policy action.

“Clean energy jobs support families in every state, and they contribute to our greater focus on reducing greenhouse gas emissions and averting ever-costlier extreme weather. Ensuring first that the jobs lost during the pandemic return and then resuming the recent trends of job growth will be critical for the U.S. economy to remain stable and internationally competitive in the years ahead.”

“Accelerating the clean energy transition will help drive America’s economic recovery, create millions of good-paying jobs, and catalyze billions of dollars in investment across every state in the country. It is also vital to America’s global competitiveness, energy independence and the emissions reductions scientists say we need to avoid the worst impacts of climate change.

“Through a comprehensive, long-term, scientifically-driven climate policy, we can recover from the adverse nationwide impacts of the pandemic and put millions back to work building the clean energy future Americans want and deserve.”

“There is a growing consensus within the business, workforce and education sectors that today’s workers must be equipped with a different skill set than in the past. This new skill set emphasizes collective thinking and action, innovation and adaptability to meet the demands of a new energy economy.

“Moreover, and as importantly, we must ensure that justice and equity principles guide the energy transition. CELI sees its work of supporting emerging leaders to build this decarbonized and resilient economy as the work of deepening our collective analysis and action to advance justice, equity, diversity and inclusion.

Capital is one of the most important factors limiting the establishment, expansion and growth of minority-owned businesses. Without adequate funding, minority owned firms face significant challenges... (Read More)