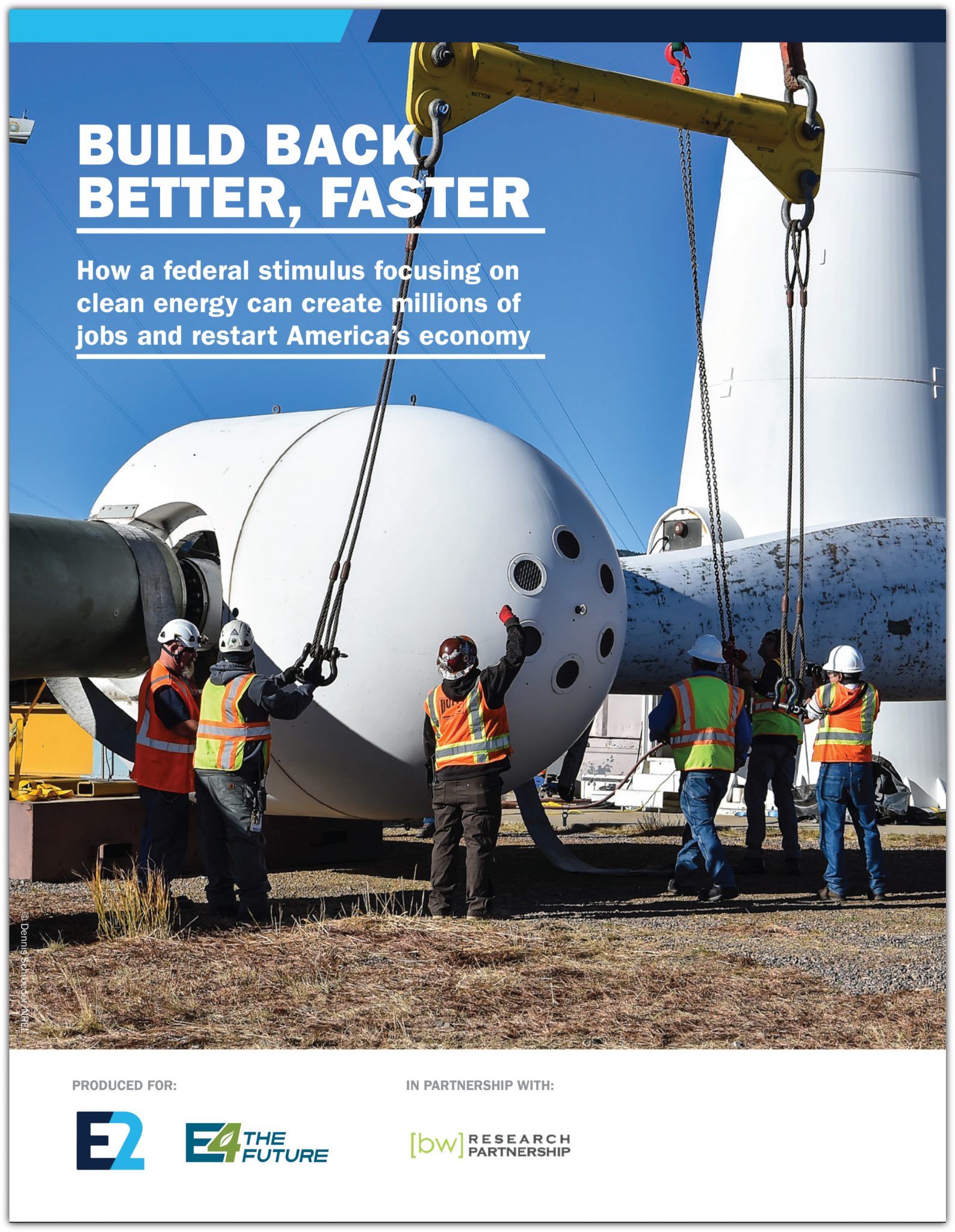 The coronavirus (COVID-19) pandemic has caused millions of Americans—including as many as 620,500 clean energy workers—to lose their jobs over just a few months. E2 and E4TheFuture partnered with BW Research Partnership on this economic impact assessment to demonstrate the potential for creating jobs from federal stimulus investments in three major sectors of the clean energy economy: Energy Efficiency, Renewable Energy, and Grid Modernization.

The clean energy industry is proven to provide a great return on stimulus investments. During the Great Recession, the American Recovery and Reinvestment Act of 2009 (ARRA) directed a portion of stimulus investments to supply chain components for major clean energy technology sectors such as advanced vehicles, batteries, renewable energy, carbon capture and sequestration, grid modernization, and energy efficiency. It is estimated that these $90 billion in strategic investments and incentives supported roughly 900,000 job-years from 2009 through 2015. These investments also set the stage for long-term job growth across the nation’s clean energy industry. By 2019, the clean energy workforce was 3.4 million workers strong and had been growing two times faster than nationwide employment since 2017.

Economic benefits of the proposed federal stimulus package include high-quality jobs for U.S. residents, labor income, boosts to local, state, and federal tax revenues, contributions to Gross Domestic Product (GDP), and energy cost savings. All these benefits ultimately translate to greater spending in the economy. Clean energy jobs are proven to be sustainable wage positions that are accessible to all localities across the U.S., regardless of geography, or politics, and provide new, equitable job opportunities that cannot be outsourced. Moreover, updates to the nation’s energy infrastructure are an investment in the collective economic future of Americans; the creation of a more resilient energy system is vital to economic growth and security.

This report looks at the first five years of economic impacts from a robust federal clean energy stimulus totaling $99.2 billion—with targeted and strategic investments in energy efficiency, renewable energy, and grid modernization. Our modeling finds that such an investment in our shared future would create 860,300 full time direct, indirect and induced jobs that will last for at least five years (a total of 4.3 million job-years). A stimulus of this level and the jobs it would create would also generate more than $66 billion in GDP each year for the next five years—resulting in $330 billion in economic activity, more than triple the amount of investment. These are jobs that would support sustainable wages and help bring the U.S. economy out of the severe recession.

The analysis expands on data from the 2020 U.S. Energy and Employment Report (USEER) produced by the Energy Futures Initiative (EFI) in partnership with the National Association of State Energy Officials (NASEO), using data collected and analyzed by the BW Research Partnership. The report was released in March 2020 and is available at www.usenergyjobs.org. E2 is a partner on the USEER, the fifth installment of the energy survey first released by the Department of Energy in 2016 and subsequently abandoned under the Trump administration. Clean energy jobs have grown every year since the first report was released in 2016.