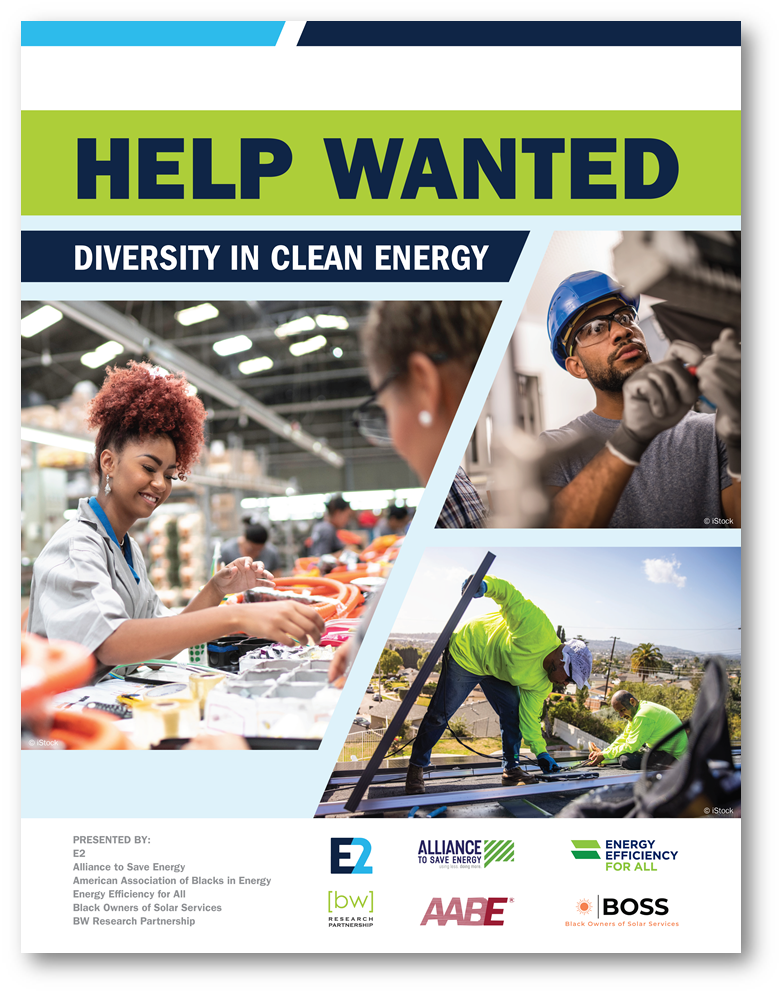 Clean energy has a diversity problem.

Despite its broad range of businesses, including construction, utilities, manufacturing, professional services, and repair and maintenance, the clean energy sector is dominated by white men. Given the incredible job growth of the energy sector over the past decade, this lack of diversity threatens to cause women, Hispanic and Latino workers, and Black workers in particular to miss out on one of America’s great economic expansions.

About 61 percent of clean energy workers across America are white non-Hispanics. Black and Hispanic/Latino workers are more poorly represented in clean energy than they are across the rest of the economy, with Black people composing 8 percent of the clean energy workforce (compared with 13 percent economy-wide) and Hispanic/Latinos making up 16.5 percent (versus 18 percent economy-wide). Women represent less than 30 percent of all workers in the sector despite accounting for nearly half (48 percent) of the U.S. labor force as a whole.

As the United States looks to build back a better, cleaner, more equitable economy, a renewed focus on increasing diversity in the clean energy sector should be an economic imperative. Both the transition to a low-carbon energy system and proposed state and federal stimulus to boost the economy have the potential to create millions of new jobs across the United States. Policies that support the energy sector and its low-carbon transition should focus on the inclusion of women and underrepresented ethnic and racial groups, particularly Black workers (who are often the most poorly represented in the sector), so that economic benefits are more equitably shared.

The study expands on data from the 2021 U.S. Energy and Employment Report (USEER) produced by the U.S. Department of Energy. Among the report’s key findings:

The full report includes national and state-by-state breakdowns on demographics across all clean energy sectors, multi-year demographic trends, comparisons to other energy sectors including fossil fuels and gas and diesel vehicles, and specific findings on individual occupations.

This analysis indicates that more needs to be done to address racial inequities in clean energy and the broader economy. As we rebuild the U.S. economy in the wake of COVID-19, we have a chance to do it in ways that create new opportunities for people of color. As Congress and state lawmakers focus on clean energy’s role in the recovery, they should focus as well on rebuilding the economy more equitably.

President Biden’s Justice40 initiative mandating that 40 percent of the benefits from federal climate action go to disadvantaged communities is a step in the right direction. But there are many steps lawmakers can take—right now—to ensure greater diversity in the clean energy workforce in the months and years ahead.

Read the the report’s policy recommendations  starting on page 24.

This is the first-ever comprehensive report on diversity in the U.S. clean energy workforce. This analysis was conducted by BW Research Partnership for E2, the Alliance to Save Energy, the American Association of Blacks in Energy, Black Owners of Solar Services (BOSS), and Energy Efficiency for All. Early drafts of this report were also reviewed by the Policy Committee of BOSS. It expands on data from the 2021 U.S. Energy and Employment Report (USEER) produced by the Department of Energy, using data collected and analyzed by BW Research Partnership. The USEER analyzes data from the U.S. Bureau of Labor Statistics Quarterly Census of Employment and Wages to track employment across many energy production, transmission, and distribution subsectors. For further methodology questions, see pages 201–206 of the USEER.

Other sources of data are noted throughout.