Climate crisis “is costing our businesses and our economy every year” 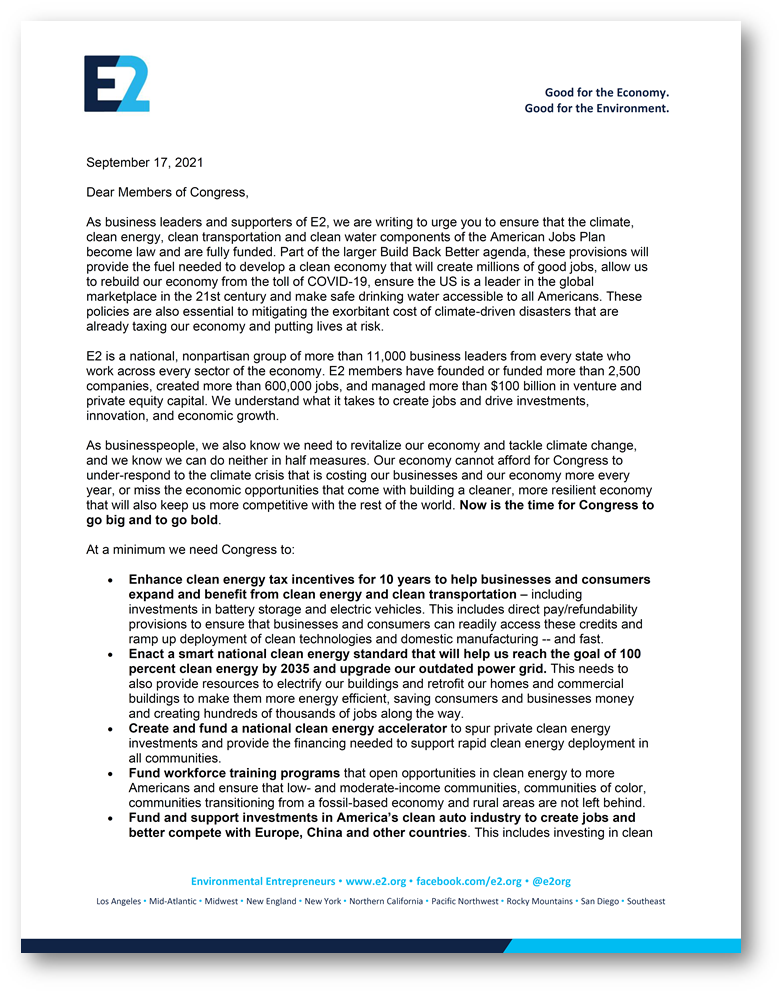 WASHINGTON – More than 400 U.S. business leaders called on Congress to “go big and go bold” to address the climate crisis threatening the economy and pass the Build Back Better Act in a letter delivered to all 435 members of Congress this week. With negotiations around the reconciliation package ongoing and the bipartisan infrastructure bill set for a vote next week, the group of senior executives, owners, investors and entrepreneurs warned against “half-measures” and under-responding to a crisis “that is costing our businesses and our economy more every year.”

The letter, organized by the national non-partisan business group E2 (Environmental Entrepreneurs), calls on Congress to pass the climate and clean energy provisions in the Build Back Better Act and the infrastructure bills at their full levels. That includes the Clean Electricity Performance Program (CEPP), tax incentives for clean energy and clean vehicles and a national clean energy accelerator.

Bob Keefe, executive director of E2 said:
“Don’t believe the U.S. Chamber of Commerce, the petroleum industry and other Washington lobby groups that say we can’t afford to address climate change. Business leaders in every state who are reeling from fires, flooding, hurricanes and drought know that the economic costs of climate change are too big to go small with the packages before Congress right now. “

Rob Erlichman, founder and CEO of Sunlight Energy in California said:
“Recent wildfires and extreme weather have made it all the more important that Congress go big on the Build Back Better Act. To aid in resilience for such extreme climate, we need incentives for clean energy and battery storage. We need the [Clean Electricity Performance Program]. And we need workforce training to prepare workers for millions of new jobs that cannot be outsourced.”

Suzanne Hunt, president of Hunt Green LLC in New York said.
“The Build Back Better plan — including the elements that will ensure that all corporations pay fair tax rates – is long overdue. To change the curve on climate emissions, we need significant federal investment in climate solutions for the public good.”

Ian Hill, co-founder of SeQuential Biofuels in Oregon said:
“Now is the moment for Congress to take bold, transformative action on climate. The window of opportunity is rapidly closing, but the right investments now promise to not only turn the tide on climate but to catalyze the growth of cleantech companies and the jobs they bring across the country. It’s past time for America to reinvest in America!”

AJ Patton, CEO and founder of 548 Capital in Illinois said:
“The transition to clean energy is happening globally. The question before Congress right now is – will U.S. businesses be prepared for the transition or will we be left behind? Will we train up a workforce to participate or miss out on millions of new jobs? And will we ensure that all communities benefit from the jobs, cost savings and other benefits of a cleaner more resilient economy?“The Build Back Better agenda is about investing in workforce training, financing and deployment of clean energy for a more competitive, more equitable and more resilient US Economy and there is no time to wait.”

Eric Berman, board member at E8 in Washington said:
“There’s no better investment Congress can make than in clean energy and climate solutions. The climate provisions of the Build Back Better agenda would help ensure the U.S. remains a global leader in the 21st century economy while creating millions of additional good jobs in the fast-growing clean energy sector.”

Bonnie Gurry, co-founder of GreenPortfolio in New York said:
“As someone who works to help everyone get invested in a clean energy future, I know how important it is for our government to be investing in our future, too. That’s why I strongly urge you to support the bold investments in clean energy and climate action in the Build Back Better plan including the corporate tax increases needed to pay for them.”

The cost of weather-related disasters over the last five years exceeds $600 billion, according to the National Oceanic and Atmospheric Administration, in addition to the devastating toll to our communities, that impact includes small businesses closing and local workers losing jobs, supply chain disruptions for businesses big and small and the costs are only increasing.