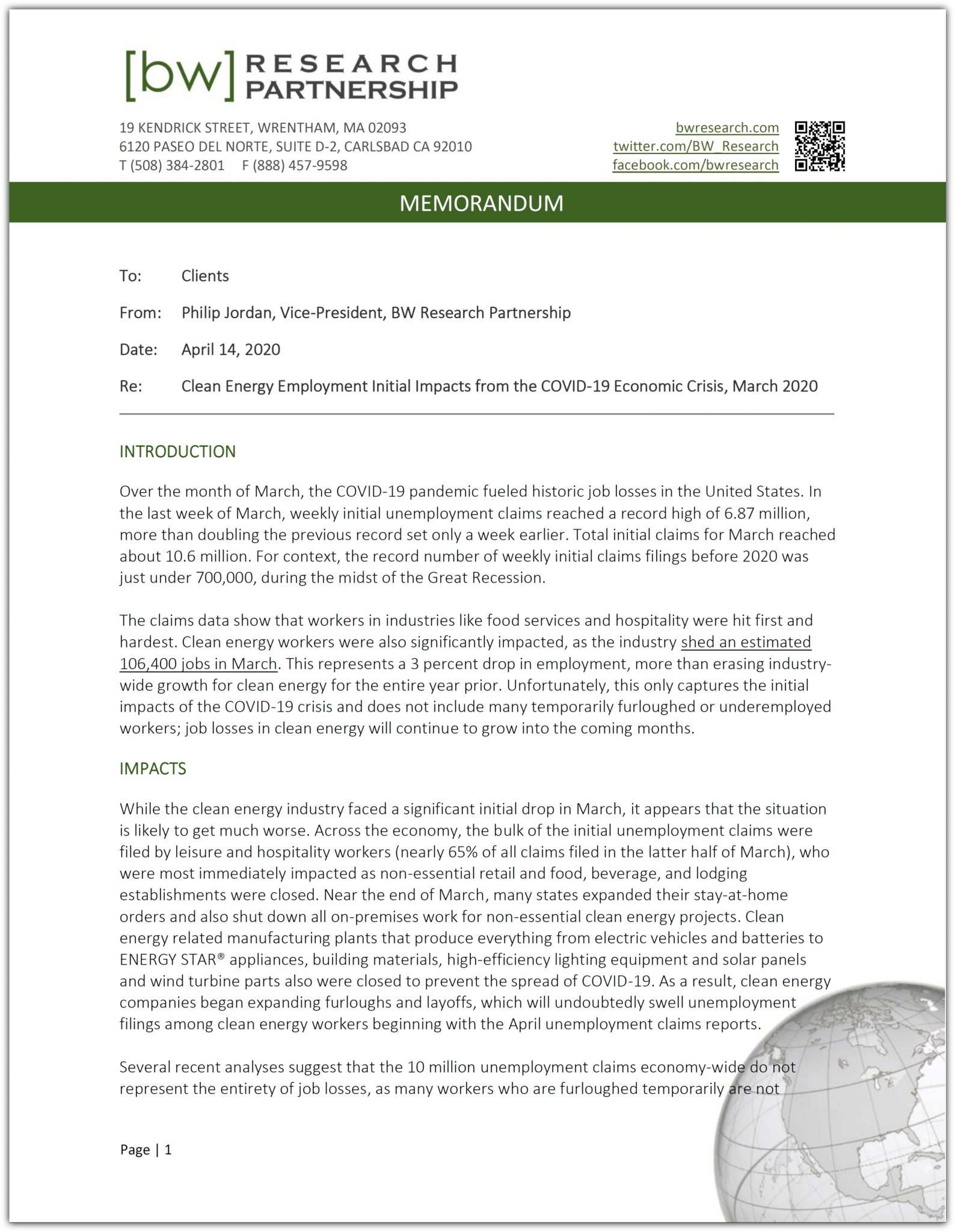 More than 106,000 clean energy workers lost their jobs in the month of March, and hundreds of thousands more clean energy job losses are projected in the coming months. That’s according to a new analysis of unemployment data released today by E2 (Environmental Entrepreneurs), the American Council on Renewable Energy (ACORE), E4TheFuture and BW Research Partnership.

Clean energy has been one of the U.S. economy’s biggest and fastest–growing employment sectors over the past decade, growing 10.4 percent since 2015. According to a separate report released today by E2, U.S. clean energy jobs increased to nearly 3.4 million at the end of 2019. Clean Jobs America 2020  found the industry accounted for more than half of the entire energy sector’s job growth in 2019, adding more than 70,000 jobs for a 2.2 percent growth rate – a faster pace than the U.S. workforce as a whole. At the start of 2020, America’s clean energy workforce accounted for more than one out of every 50 U.S. workers. That made clean energy by far the biggest employer of workers in energy occupations, employing nearly three times more workers than the fossil fuel industry. 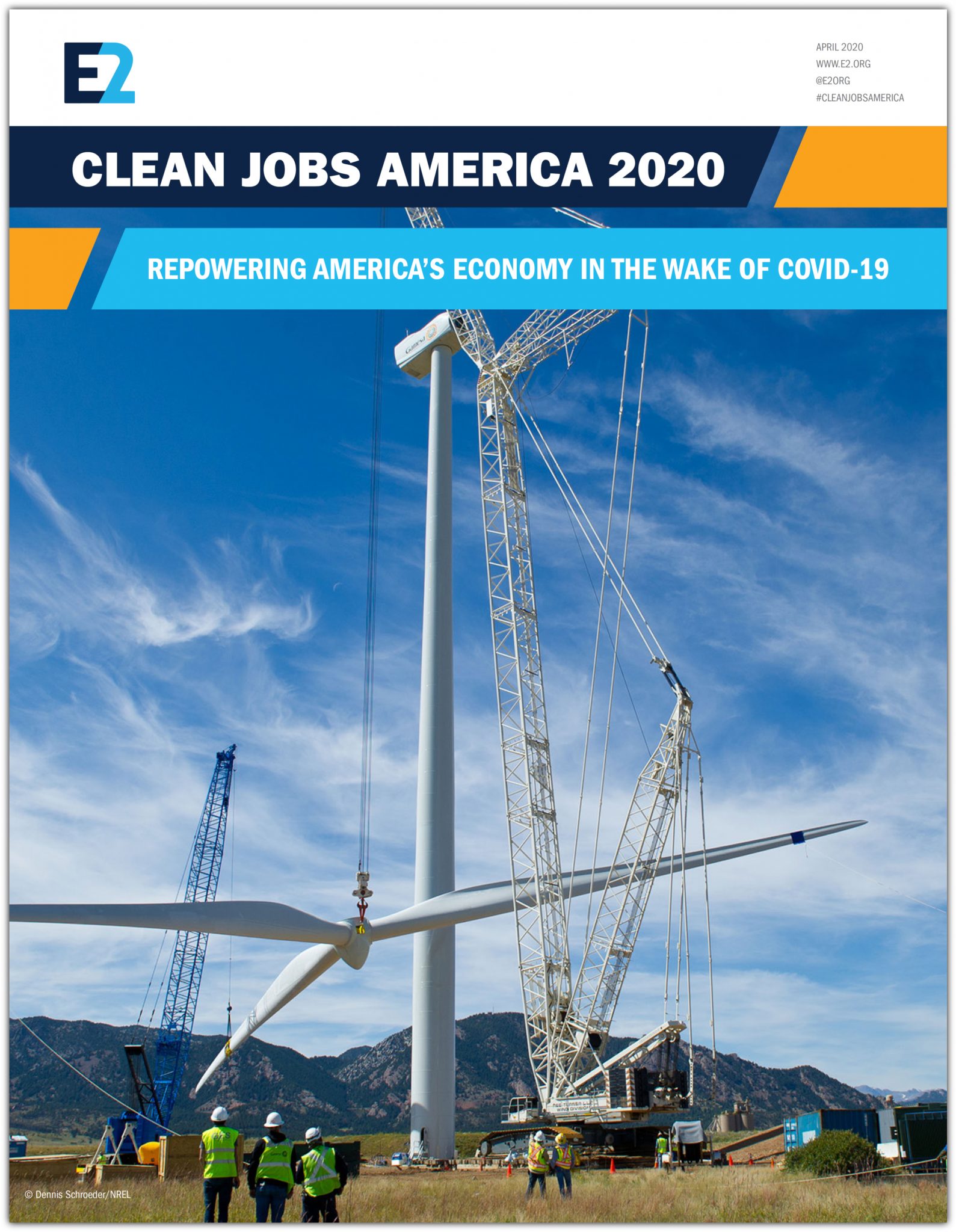 But all that growth came to a screeching halt in March due to the COVID-19 pandemic and its economic fallout. The March layoffs are just the first indication of how badly the clean energy industry will be hit by the crisis, with the analysis projecting that more than 500,000 clean energy workers – 15 percent of the entire clean energy workforce – will lose their jobs in the months ahead, unless Congress and the Trump administration take quick and substantive action.

A loss of that magnitude would erase the clean energy industry’s total job growth over the last five years.

“What these numbers tell us is that clean energy workers are a huge and important part of America’s workforce – and they are hurting badly. Lawmakers simply cannot ignore the millions of electricians, technicians and factory workers who work in clean energy as they consider ongoing economic recovery efforts – especially since we know from our country’s last economic meltdown that clean energy can lead the way to recovery.”

“This analysis quantifies in stark terms the damage COVID-19 is already doing to the renewable energy workforce, and the devastating trajectory we’re facing absent help from Congress. The renewable sector is being hit hard by supply chain disruptions, shelter-in-place orders and other significant pandemic-related delays. To stem job losses, we ask Congress to extend the time-sensitive deadlines faced by renewable projects seeking to qualify for critical tax incentives, and to provide temporary refundability for renewable tax credits that are increasingly difficult to monetize. In the end, we’re all in this together, and the renewable energy industry wants to be a key economic driver to help the nation through this downturn, as well as an effective climate solution over the long haul.”

“The economic fallout from COVID-19 is historic in both size and speed. Activities across the entire range of clean energy activities, from manufacturing electric vehicles to installing solar panels, are being impacted. And the data pretty clearly indicate that this is just the beginning.”

“Each year our ally E4TheFuture co-publishes a report detailing the growth of energy efficiency jobs – but that trend is threatened right now. March unemployment claims, and projections of worse to come, are alarming. From contractors who can’t go into homes to weatherize them to employees in shut-down electric car factories, energy efficiency workers have lost their jobs – and that costs all of us. Consumers lose out on utility bill savings, and the country curtails a critical tool for slashing greenhouse gas emissions. We need to support this workforce during the crisis and quickly get them back on the job when the health threat subsides.”

For quotes from more than half a dozen clean energy business owners and professionals who work or do business across America, click here.

According to the unemployment data analysis, energy efficiency lost more jobs than any other sector of the clean energy industry in March, with nearly 70,000 people losing their jobs. The losses in the energy efficiency sector accounted for about two-thirds of all clean energy unemployment filings – as electricians, plumbers, construction workers, energy auditors and others were unable to enter homes, offices and other buildings because of coronavirus quarantines.

Renewable energy lost more than 16,000 lost jobs, and filings are expected to increase substantially in the coming weeks as solar and wind energy companies struggle with sudden and massive financing issues that are resulting in canceled and delayed projects.

The clean vehicle sector was also severely impacted, losing 12,000 jobs in factories that manufacture electric and hybrid vehicles and the parts that go in them. This represents the largest percentage job loss —4.5 percent — of any clean energy sector. This does not include the 20,000 workers that Tesla Inc. furloughed, or other losses posted after this March data was collected.

California, North Carolina, Pennsylvania, Michigan and Massachusetts were among the states that saw the most unemployment filings in clean energy last month, while 26 states saw job losses rise above 1,000, according to the analysis.

The widespread layoffs in clean energy risk derailing an industry that was leading the country in job creation. At the start of 2020, clean energy employment increased for the fifth straight year, growing to nearly 3.4 million workers nationwide. Renewable energy led the way, increasing 3.2 percent to about 523,000 jobs.

Energy efficiency continues to be the single largest section of the clean energy economy, employing 2.4 million Americans at the end of 2019, up 2.3 percent from 2018 despite federal rollbacks and delays of energy efficiency standards.

The clean vehicle sector was the only clean energy sector that saw job declines in 2019, dropping 2.3 percent to more than 266,000 jobs, in part because of industry uncertainty about rollbacks of federal vehicle emissions and mileage standards, which were recently finalized. The sector’s job losses come after a record-setting year in 2018 that saw the clean vehicle industry grow 17 percent and add more than 40,000 jobs.

For more information or for interview requests, please contact Michael Timberlake (202–289–2407; mtimberlake@e2.org) or Alex Frank (703–276-3264; afrank@hastingsgroup.com).  A recording of the telepress conference announcing the two reports can be found here.

The Clean Jobs America 2020 report is E2’s fifth iteration of the annual employment analysis. The report expands on data from the 2020 U.S. Energy and Employment Report (USEER) produced by the Energy Futures Initiative (EFI) in partnership with the National Association of State Energy Officials (NASEO), using data collected and analyzed by the BW Research Partnership. The report was released in March 2020 and is available at www.usenergyjobs.org. E2 is a partner on the USEER, the fifth installment of the energy survey first released by the Department of Energy in 2016 and subsequently abandoned under the Trump administration.