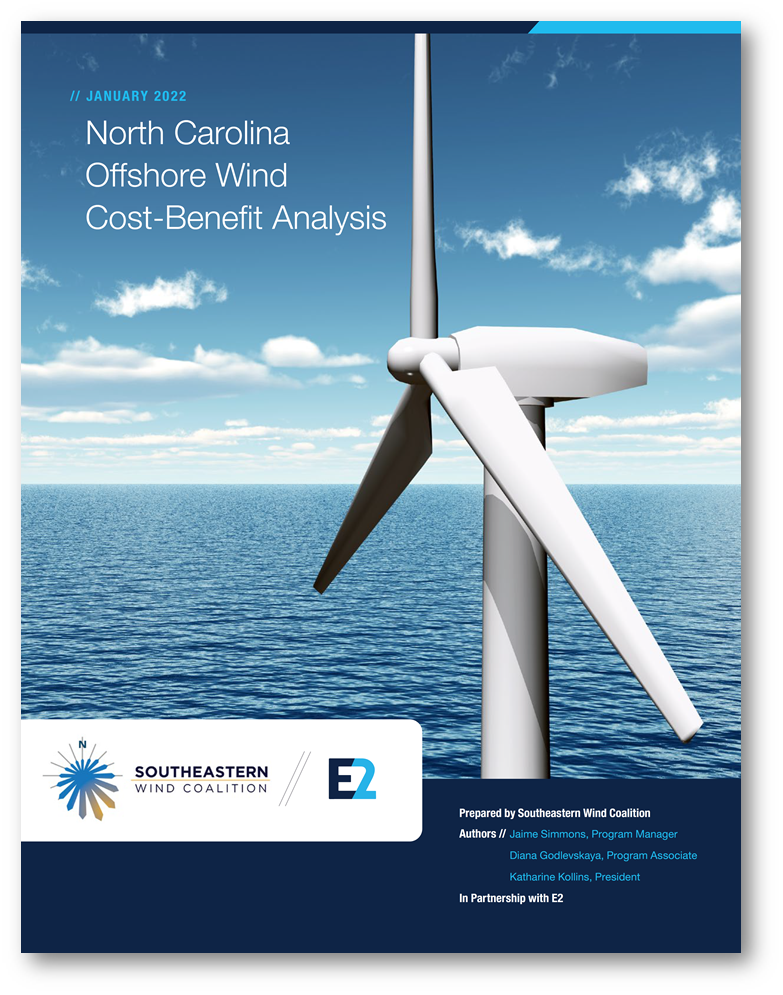 Over the next decade offshore wind is expected to play a significant role in decarbonizing the U.S. electric sector, and especially along the East Coast. When states are considering offshore wind goals, they will certainly evaluate the myriad of associated costs and benefits.

This analysis was developed to help decision makers quantify some of the economic development and environmental benefits associated with offshore wind. This analysis calculates the costs and benefits associated with a single 2.8-gigawatt (GW) offshore wind project off the coast of North Carolina in operation by 2030. Both a base scenario, assuming a standard amount of local manufacturing/supply chain content, and a high local content (or “high”) scenario, were developed.

The high scenario assumes 100% local content for both the blades and offshore substations of a single 2.8GW theoretical project. Content assumptions are based on findings from the March 2021 offshore wind supply chain study conducted on behalf of the North Carolina Department of Commerce, which indicates these components being most likely to locate production in-state. While not within the scope of this calculation, it is important to highlight the compounded value that new or expanded offshore wind supply chain capabilities located in North Carolina will create. In addition to providing economic benefit to the state through projects developed off the coast of North Carolina, offshore wind manufacturers will also supply components for projects along the Atlantic coast or potentially across the country or the globe — generating continued economic benefit to the state, absent the cost of generating electricity. 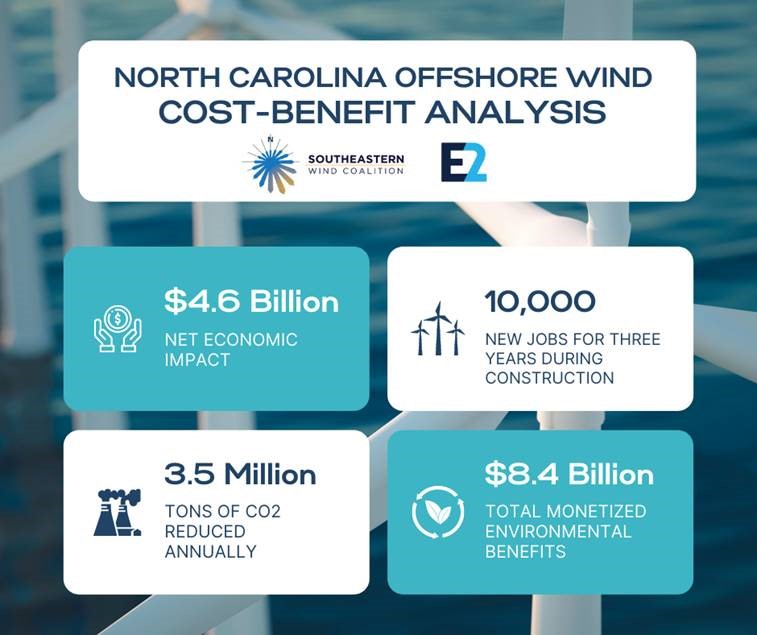 Recently codified in state-level legislation, North Carolina has asserted the carbon-reduction goal of 70% by 2030 and to achieve carbon neutrality by mid-century4 . To that end, the Governor’s administration, the North Carolina General Assembly, and Duke Energy have all endeavored to examine pathways to reliably and costeffectively decarbonize the state’s electric grid5,6,7,8. While offshore wind has occasionally been an element of these discussions, due to relative cost and nascency of the U.S. offshore wind industry, it hasn’t been evaluated as a primary tool for decarbonization.

Absent from any of the decarbonization modeling or stakeholder processes conducted in the state since 2018 is the consideration of the economic benefits that accompany offshore wind. According to the American Wind Energy Association (AWEA), now the American Clean Power Association (ACP), an estimated 30GW of offshore wind deployment in the U.S. by 2030 could generate as much as $57 billion in economic output9 . As such, the inclusion of these benefits is critical when understanding the full value of the technology.

This analysis determines both the costs and benefits of a theoretical 2.8-gigawatt (GW) offshore wind project developed off the coast of North Carolina in operation by 2030 using industry-standard practices, data, and modeling tools. The costs and benefits are measured against one another to determine the net economic impact.