America’s Clean Economy Powerhouse in the Wake of COVID-19 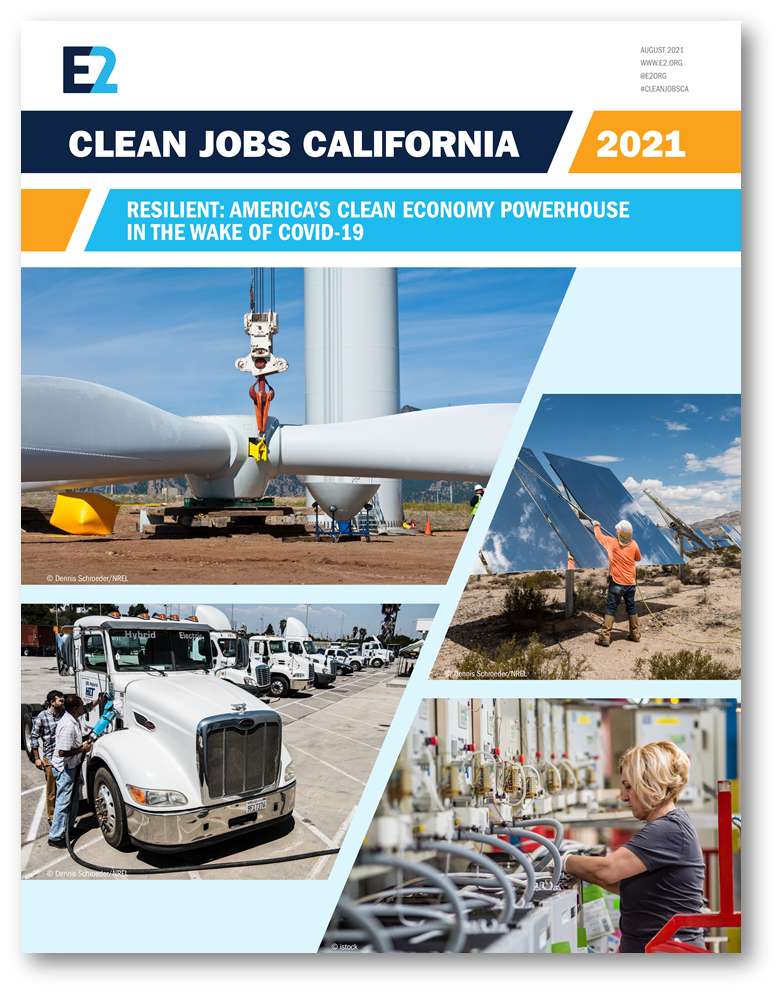 Driven by the unforeseeable impact of last year’s pandemic and resulting economic crisis, California experienced its first decline in clean energy jobs in 2020 since E2 began tracking such occupations. California’s clean energy economy employed about 480,000 Californians at the end of 2020, down from 537,000 the year before.

However, since the sector’s losses peaked at the end of May 2020, jobs grew back by more than 13 percent compared to less than 6 percent in statewide economy overall. In fact, by the end of 2020 more than half of the clean energy jobs lost between March and May had been regained, leaving the sector down just 9 percent (about 52,000 jobs) since COVID-19.  Thanks to decades of smart state climate policy leadership, California’s clean energy economy has proven to not only be a core part of the state’s economy – representing 3 percent of overall state employment – but resilient and robust in the face of crushing economy-wide pressures.

While clean energy suffered like many sectors of the economy in 2020, the prospects for growth are greater than ever as detailed in this report.  Smart public policy leadership created the market environment to position California’s clean energy economy as a global leader over the last 20 years. Furthermore, policies that drive clean energy investments and job growth can also help mitigate the human toll and the economic cost of climate including the over $100 billion lost to extreme weather events in the U.S. in the last year alone. Climate risk is business risk.

Members of Congress can turn risk into opportunity by passing a robust American Jobs Plan anchored in clean energy investments to fund grid modernization, energy efficiency and electric vehicle charging networks at scale to form the backbone of a cleaner, more resilient economy. California lawmakers must build on existing state climate policy leadership to ensure the state remains a hub of job growth and innovation. Lawmakers must codify our state’s carbon neutrality goals while tightening our emissions mitigation targets, and continue to build out complementary policies to drive climate action to meet these goals.

This is the fourth annual Clean Jobs California report produced by E2 based on analysis of the USEER, which was first released by the DOE in 2016. E2 was an original proponent of the DOE producing the USEER and was a partner on the reports produced by the Energy Futures Initiative (EFI) and National Association of State Energy Officials (NASEO) after the Trump administration abandoned it in 2017.

An FAQ is available at www.e2.org/reports/clean-jobs-america-faq/.

Clean Jobs California 2021 is the 4th clean energy jobs report for California from E2. Previous reports can be accessed in the below links.