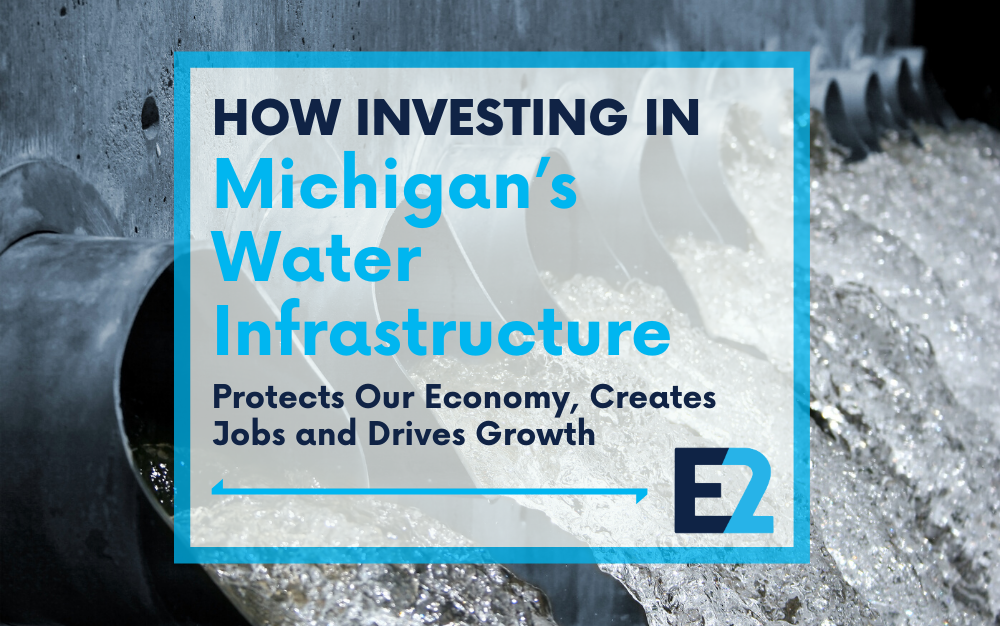 LANSING (November 14, 2019) – Investing $12 billion on top of existing water infrastructure expenditures over the next two decades would address the Flint water problem and also create nearly 90,000 direct full-time jobs and generate $8.8 billion in total direct, indirect, and induced labor income in Michigan, according to a new study from the national, nonpartisan business group E2 (Environmental Entrepreneurs).

According to the report, How Investing in Michigan’s Water Infrastructure Protects Our Economy, Creates Jobs and Drives Growth, overhauling Michigan’s infrastructure—including residential waterlines, wastewater and stormwater infrastructure—would generate $441 million in additional wages for workers and $28 million in state and local tax revenue every year for 20 years.

“Keeping Michigan’s water infrastructure functioning properly — and keeping contaminants out of our water supplies — is essential to the state’s economy, public health and our quality of life,” said Micaela Preskill, E2 Midwest Advocate.

Michigan has for decades underinvested in its water infrastructure at the expense of the economy and the health of families in the state. By updating and investing in fresh water technology, Michigan would be tapping into a sector worth over $100 billion annually in the U.S. and $400 billion globally. Surrounded by 84 percent of North America’s surface fresh water, Michigan is in a unique competitive advantage that can bring thousands of jobs and billions of dollars to local economies across the state.

“As a company delivering safe, innovative and sustainable infrastructure solutions in Flint, we’ve seen first-hand how having access to clean, reliable water benefits businesses and communities, alike,” said Rhonda Grayer, owner of Flint-based WT Stevens. “We believe that reinvesting in Michigan’s water infrastructure is necessary to do business and allows us to create jobs that bring resources back to our communities.”

“Great beer starts with clean water,” said Dayne Bartscht, founder of Detroit-based Eastern Market Brewing Co. “Michigan has become known for its craft beer and a big part of that is our easy access to the Great Lakes. At Eastern Market Brewing Co, we believe it’s time to ensure everyone in Michigan, including our fellow breweries, can trust in the future of our water. Knowing how many jobs will be created through these infrastructure investments is just another added bonus.”

The need for strong investment in Michigan’s water infrastructure is further underscored when looking at the importance of water to the broader Michigan economy.

For more information or to inquire about interviewing the authors of the report and speak with Michigan business leaders who believe clean water is vital to the state’s economy, please contact Michael Timberlake at (202) 289-2407 or mtimberlake@e2.org.