State is Poised to Reclaim Leadership in Clean Energy

Trenton, N.J. (May 23, 2019) – A new report shows that clean energy jobs are now a major part of New Jersey’s economy and that the state is well positioned to reclaim its role as a national leader in clean energy.

The report by the national, nonpartisan business group E2 (Environmental Entrepreneurs) was released today at an event commemorating the first anniversary of the signing of the historic Clean Energy Law and a companion Executive Order by Gov. Phil Murphy. The report is one of many proof points that will be instrumental in helping New Jersey reclaim its leadership position in clean energy. 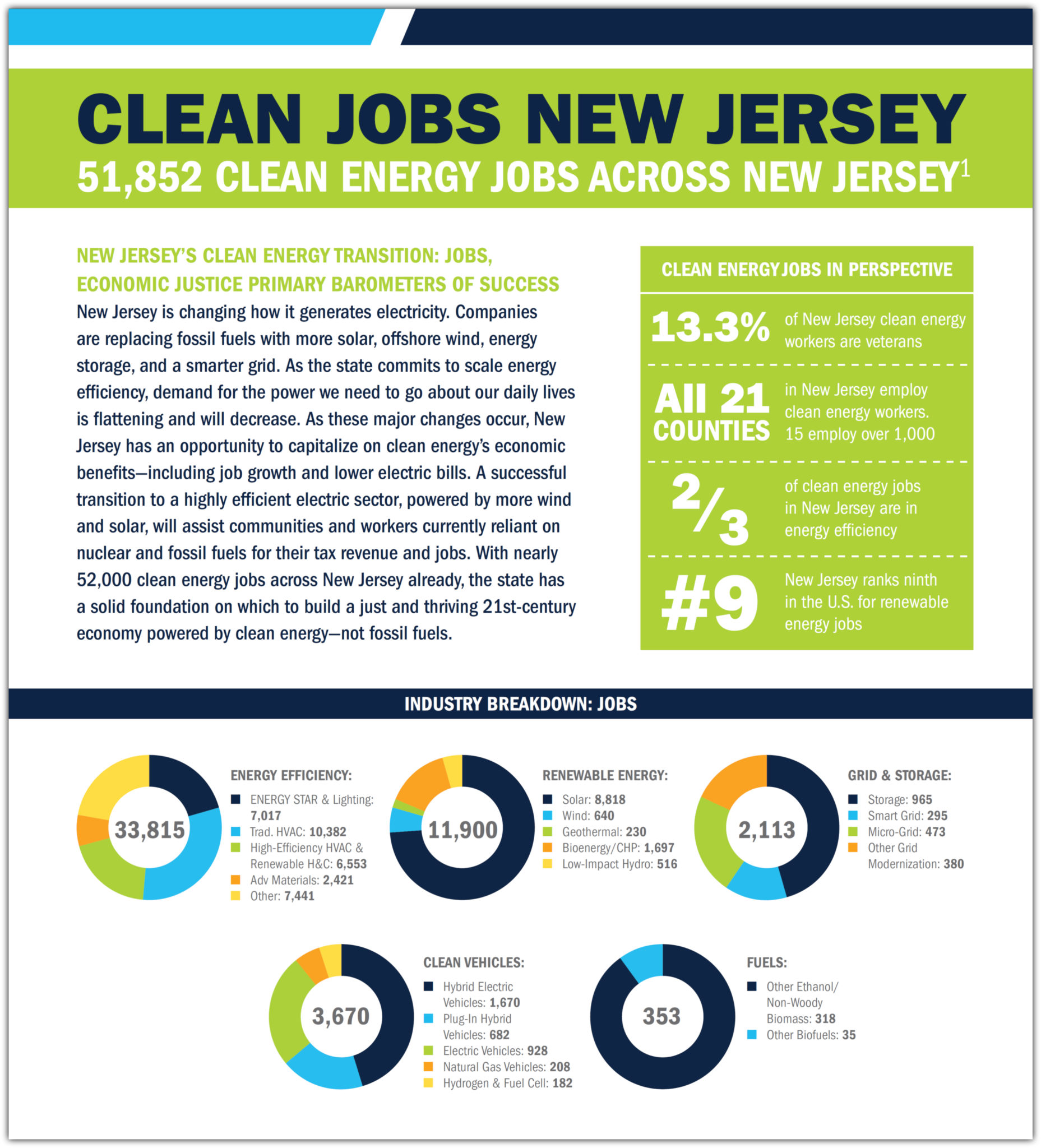 With nearly 52,000 jobs statewide in areas including renewable energy such as wind and solar, clean vehicles manufacturing, and energy efficiency, New Jersey’s clean energy economy employs about as many workers as UPS (19,000) workers), Walmart (17,405), and Verizon (15,000) combined. Already with the ninth most renewable energy jobs among all states, New Jersey has a solid foundation to build a just and thriving 21st century economy powered by clean energy — not fossil fuels.

The report notes that clean energy jobs have grown every year since the first report was released in 2016. And now, with Gov. Murphy’s support, New Jersey is on a path to be at the forefront of leaders in clean energy. Other specific findings in the report include:

“E2’s new report proves that New Jersey’s clean energy economy is open for business,” said E2 Eastern States Advocate Noah Dubin. “As a network of business leaders, we have seen how smart investments in renewables, energy efficiency, and clean vehicles benefit both the state’s economy and its environment. Now, after a landmark year of progress on policies that support jobs in solar, offshore wind, and energy efficiency, New Jersey’s clean energy businesses are reaping the rewards of a stronger economy.”

“It’s important for every New Jerseyan to know the hard work Gov. Phil Murphy and legislative leaders are doing to make New Jersey a national leader in addressing the climate crisis and catalyzing tens of thousands of good local jobs in the clean energy economy,” said Ed Potosnak, executive director of the New Jersey League of Conservation Voters.

Enactment of the clean energy law last year signified a huge step in making New Jersey a national leader in the development of clean energy technologies as well as creating new good, local jobs, and reducing toxic pollution. An executive order signed by the governor the same day directs the New Jersey Board of Public Utilities to develop a plan to achieve 100 percent clean energy by 2050. Work on the Energy Master Plan for achieving that goal is underway and a draft is expected to be released next month.

“Thanks to Gov. Murphy and legislative leaders, New Jersey is firmly on the path to a clean energy future that will reduce harmful emissions, strengthen our economy, and ultimately cost less than our current gas-heavy energy mix,” said Tom Gilbert, campaign director, ReThink Energy NJ and New Jersey Conservation Foundation. “With the Trump Administration promoting more polluting fossil fuels, it is heartening that New Jersey is now leading the way on clean energy.”

“Since Gov. Murphy signed the Clean Energy Act, New Jersey has made tremendous progress toward a clean energy economy that will create more jobs, cut pollution, and improve public health,” said Mary Barber, director of regulatory & legislative affairs, Environmental Defense Fund. “Building on this momentum, we have an opportunity to find even more ways to clean our air and accelerate economic growth to fight climate change.”

Supporters of the clean energy law highlighted significant progress being made since passage, including the nation’s largest solicitation for offshore wind, the launch of a new Community Solar Pilot Program, and proceedings underway to implement new energy efficiency policies and develop more cost-effective solar incentives.

“I want to thank Gov. Murphy and the many state legislators who championed the Clean Energy Act across the finish line one year ago,” said Pari Kasotia, Mid-Atlantic director for Vote Solar. “Because of their bold leadership, solar and other local clean energy resources are poised to increase access, create jobs, and ensure that the world we are leaving to my daughter’s generation is healthier and more resilient. We’re looking forward to continuing our important work with state leaders and partners throughout New Jersey to make sure the state’s new energy economy is equitable and shines for all.”

“This one-year anniversary marks an important milestone in charting a path toward a clean energy economy for New Jersey; the progress already made serves as a testimony to the importance of decisive policy leadership in skillfully navigating from risk to opportunity.” said Richard Lawton, executive director, New Jersey Sustainable Business Council. “As companies that are committed to sustainable business practices and creating family-supporting jobs for the 21st century, we know that market-driven innovation and investment must be informed and guided by smart, forward-thinking policies like the Clean Energy Act. We applaud the governor and legislature for setting New Jersey on a course for a more vibrant, sustainable economy and urge them to build on the momentum.”

“The Nature Conservancy celebrates the one-year anniversary of the passage of the Clean Energy Bill,” said Trina Mallik, NJ Climate and Energy Policy Manager for the organization. “A healthy, natural environment depends on a clean energy future, therefore, while much work remains to be done, the momentum is clearly in the right direction for NJ. Thanks to the leadership of Gov. Murphy and the state Legislature, a supportive electorate and many corporations taking action on mitigating emissions, New Jersey is poised to be a model state in combating climate change,”

“New Jersey is leading the fight against climate change — and boosting the state’s economy in the process,” said Ada Statler, Climate & Clean Energy fellow at the Natural Resources Defense Council. “The Clean Energy Act put New Jersey on this path by ramping up energy efficiency and renewable energy resources statewide. A year later, we are seeing just how many local jobs that is creating, as well as the enormous potential to create even more.”

“The Murphy Administration has championed the goal of 100% clean energy for New Jersey, with NJBPU at the helm, showing incredible leadership and progress in key policy areas like offshore wind and community solar. Energized and guided by the Clean Energy Act, we are full steam ahead in pursuit of our clean energy future. We know the urgency of reaching that vision, and will accept nothing less for the citizens of New Jersey,” said Joseph L. Fiordaliso, President, New Jersey Board of Public Utilities (NJBPU).

“I’m proud of the great work my colleagues and I put into the landmark Clean Energy Bill signed into law on this day last year. It put New Jersey is back into a national leadership position in combating climate change, and  we’re not done. We’ve got to get all the way to 100% Clean Energy and electrify our transportation sector, and I’m working hard every day ensure these and other initiatives happen,” said Senator Bob Smith, Chair of the Energy and Environment Committee and primary sponsor of the Clean Energy Bill.

“I applaud the work of stakeholders, legislators, and the governor’s administration, which put us on the proper path towards evaluating energy consumption and in-state energy generation,” said Assemblywoman Nancy Pinkin. “Since then we have continued to develop our renewable energy industry, kept the impact on rate payers manageable and allowed the BPU to develop a long term approach to New Jersey’s solar, offshore wind, and energy efficiency markets, and catalyze good clean energy jobs.”

“Last year we exhibited New Jersey’s commitment to addressing climate change and catalyzing the good local jobs that come with, said Assemblyman John McKeon. “On the one year anniversary of the Clean Energy Bill, we look back and applaud our partners and fellow legislators on crafting legislation that is Both a win for our economy and our environment and will continue to work to ensure NJ embraces the clean energy economy of the future.”

Tomorrow, the California Air Resources Board (CARB) is expected to adopt the Advanced Clean Cars II (ACII) regulation, which requires all new cars and trucks sold in California to be zero-emission vehicles beginning in 2035. The rule builds on California’s ...