A Comprehensive Analysis of Energy Efficiency Employment Across All 50 States

In December 2016, E2 and E4TheFuture released Energy Efficiency Jobs in America, which found that energy efficiency is a massive employer with 1.9 million jobs nationwide and thousands of jobs in each and every state.

A The report, based on U.S. Bureau of Labor Statistics data and a survey of tens of thousands of businesses across the country, provides detailed breakdowns of clean energy jobs not available previously, and it was developed and released in connection with a major U.S. Department of Energy study of all energy jobs in America.

The report was a follow-up to  Clean Jobs America, a comprehensive clean energy jobs analysis released in March 2016 showing that 2.5 million Americans work in the clean energy sector. 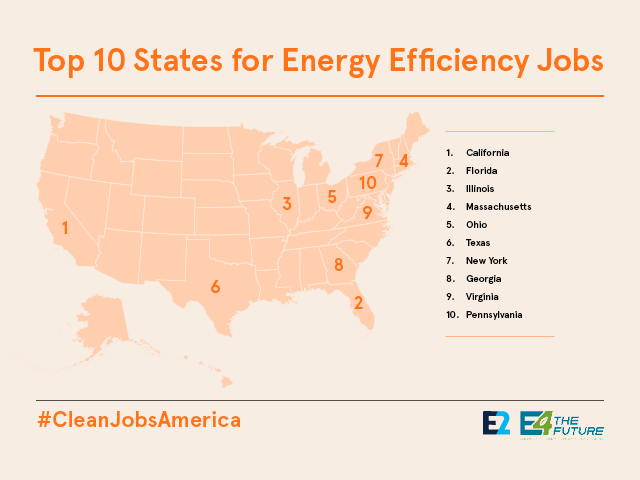 To view the full report, along with fact sheets for all 50 states, please see here.

To view the national press release, please see here. An Illinois-specific press release is available here. A recording of our press briefing is here.

You can also follow the latest on energy efficiency jobs news at @e2org, @e4thefuture, or #CleanJobsAmerica.

To see what energy efficiency workers look like in action, check out what Energy Optimizers USA is doing in Tipp City, Ohio:

Or watch how some young entrepreneurs in California are helping save schools and building owners along the West Coast thousands of dollars on their monthly electric bills – and creating good jobs in the process:

The Navy, too, has recognized the value of energy efficiency both to its operations and to taxpayers:

E2 has been tracking the clean energy jobs sector closely since 2011, when we noticed an outpouring of stories questioning the health and growth of the clean energy economy. This just didn’t agree with the reality we’re seeing in our daily work.

All across America, we’re witnessing clean energy jobs being created almost every day — helping to rebuild our economy, address our energy problems, and improve our national security. So E2, whose 850+ members represent a broad cross-section of business leaders, including many on the front lines of clean energy, set out to document this growth.