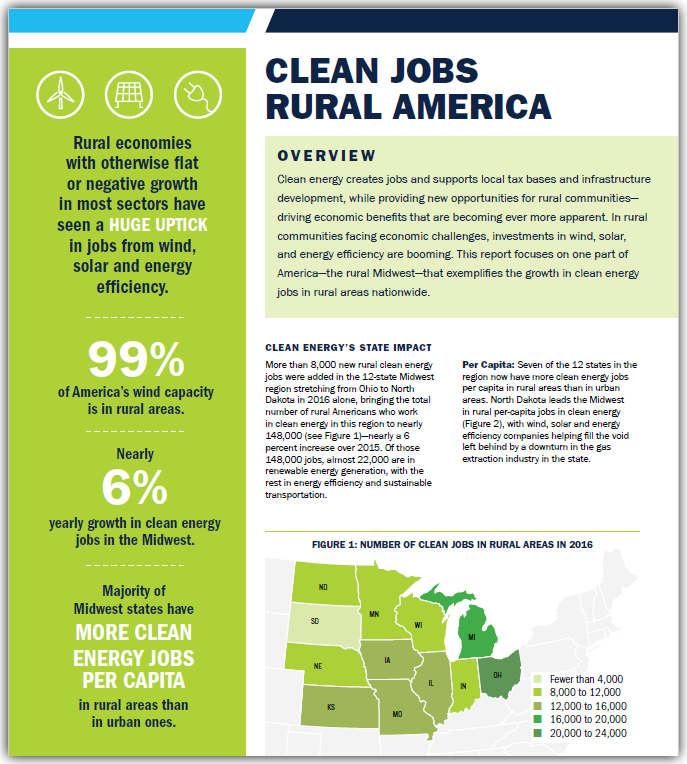 Clean energy creates jobs, supports local tax bases and infrastructure development, while providing new opportunities for farmers—driving economic benefits that are becoming ever more apparent. In rural communities facing economic challenges, investments in wind, solar, and energy efficiency are growing. This report from E2 focuses on one part of America – the rural Midwest – that exemplifies the growth in clean energy jobs in rural areas nationwide.

More than 8,000 new rural clean energy jobs were added in the 12-state Midwest region stretching from Ohio to North Dakota in 2016 alone, bringing the total number of rural Americans who work in clean energy in this region to nearly 148,000 (see Figure 1)—nearly a 6 percent increase over 2015. Of those 148,000 jobs, almost 22,000 are in renewable energy generation, with the rest in energy efficiency and sustainable transportation.

If you are looking for additional insight into E2’s Clean Jobs Rural Midwest 2018 or our other Clean Jobs America reports, visit e2.org/reports. You can also contact E2 Communications Director Michael Timberlake (mtimberlake@e2.org). An FAQ is also available here to answer any questions.