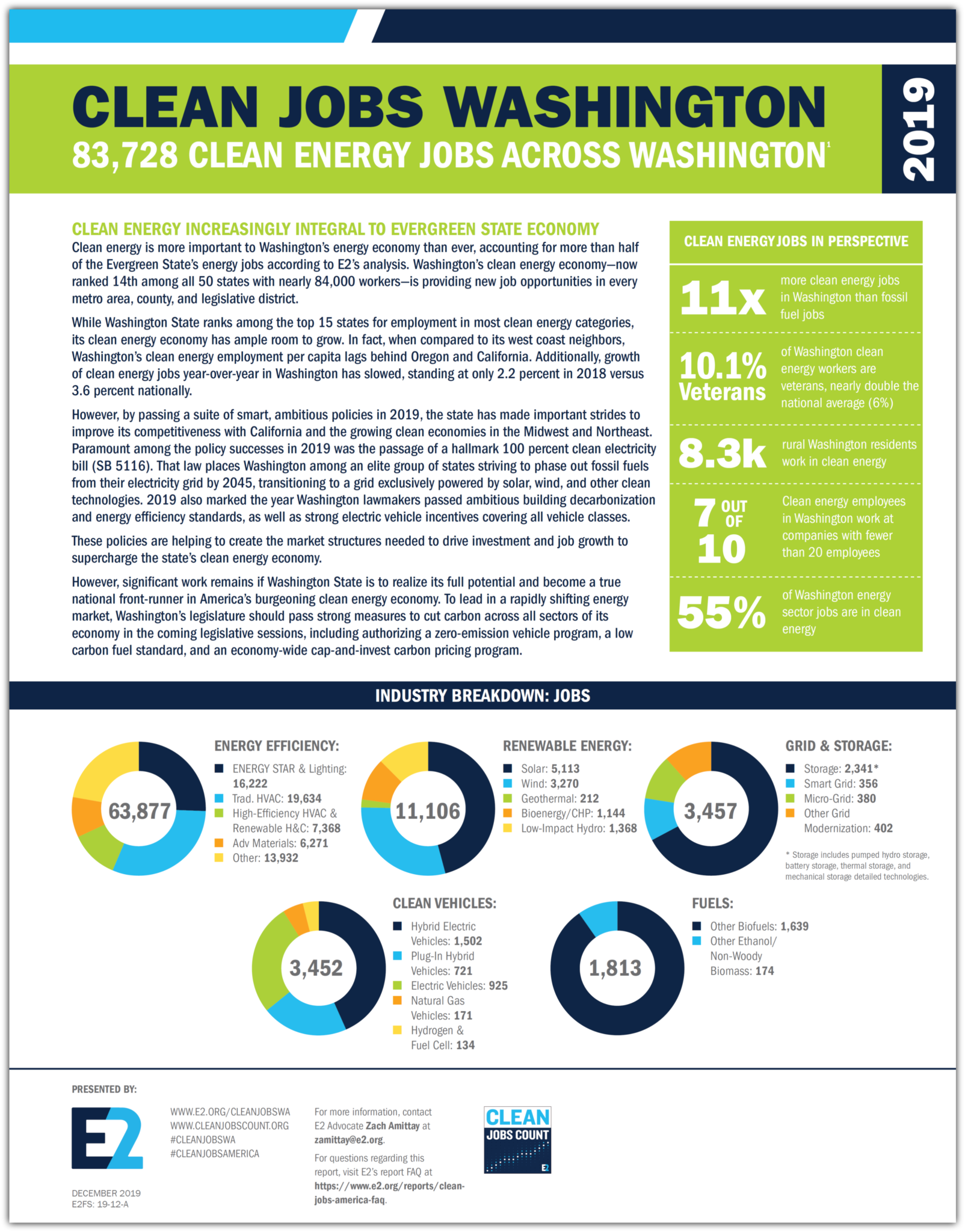 OLYMPIA (December 18, 2019) – Washington now ranks 14th among all 50 states and the District of Columbia for total number of clean energy jobs with nearly 84,000 Washington residents now employed across cleantech sectors, according to a new analysis of energy employment data by the national nonpartisan business group E2 (Environmental Entrepreneurs). According to the data, clean energy businesses now account for the majority (55%) of energy sector jobs in Washington and outnumber the state’s fossil fuel sector jobs (7,300) by 76,000 or more than 11:1.

“Businesses and lawmakers across Washington know clean energy is an economic driver for the state, and this report is further proof,” said E2 Advocate Zach Amittay.  “The findings in this report reflect Washington’s continued leadership in clean energy technologies, from clean storage to biofuels and everything in between.”

Despite this strong workforce, growth of Washington’s clean energy economy actually slowed in 2018, making it one of the only U.S. states that experienced slower job growth in clean energy (2.2%) than statewide employment (2.7%). Nationally, clean energy jobs grew 3.6 percent, with 15 states experience growth over five percent.

Washington’s clean energy economy is still on the rise,” said Seattle investor and E2 member Eric Berman. “Washington passed some bold policies in 2019 that that will allow us to demonstrate not only that clean energy solutions can compete economically with fossil fuels, but that Washington can compete effectively for future cleantech investments and jobs with its neighbors in Oregon and California and the growing clean economies in the Midwest and Northeast.

The report – which counts employment in a broad array or renewable energy, energy efficiency, clean transportation, fuels, and grid modernization fields – found energy efficiency remains the largest clean energy sector in Washington with more than 63,800 workers – up over 1,000 jobs from last year’s report. Renewable energy—led by solar (5,100 jobs) and wind (3,200)—accounted for the second-most clean energy jobs (11,100) while employment in clean vehicles grew the fastest among all sectors with a 21.4% growth rate in 2018 (3,400 total jobs). In total, clean energy now accounts for roughly 55 percent of Washington’s entire energy sector workforce (153,452).

“Meeting the challenge of climate change is an economic imperative for Washington, but it also represents an incredible economic opportunity for the state. Additional forward-thinking policies that cut carbon across all sectors of Washington’s economy can build off its current success and establish the state at the forefront of the 21st century clean energy economy,” Amittay added.

Analyzing the state geographically, Clean Jobs Washington 2019 found 45 percent of clean energy jobs were based outside the Seattle metro area, including 8,300 in rural areas. All 39 Washington counties are home to clean energy workers, with 11 counties home to at least 1,000 jobs. King led all counties with more than 36,500 jobs, followed by Snohomish (7,800) and Pierce (7,000) counties. By density, Jefferson, Benton, and King counties led the state, all home to at least 20 jobs per 1,000 employable residents. 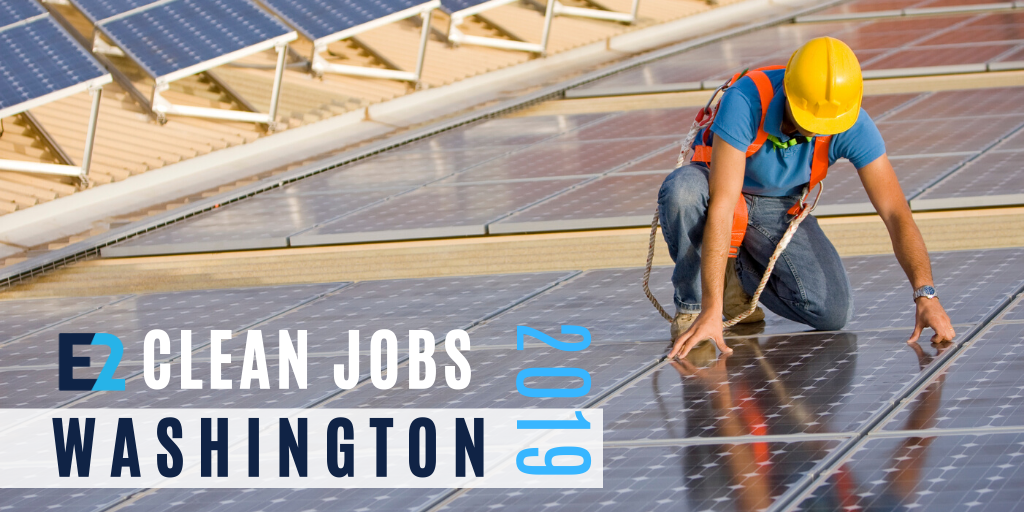 Other highlights from Clean Jobs Washington 2019:

The report follows E2’s Clean Jobs America analysis, which found that clean energy jobs account for nearly 3.3 million jobs across all 50 states and the District of Columbia. Both reports are based on data from the 2019 U.S. Energy and Employment Report (USEER) produced by the Energy Futures Initiative (EFI) in partnership with the National Association of State Energy Officials (NASEO). E2 is a partner on the USEER, the fourth installment of the energy survey first released by the Department of Energy in 2016 and now executed by a coalition including E2.