The report, Offshore Wind: Generating Economic Benefits on the East Coast, studied the economic impact from building a single average offshore wind farm (352 MW, or roughly 44 turbines) off each of the coasts of New York, New Jersey, Virginia, North Carolina, and South Carolina. According to the analysis, the five average offshore wind projects would generate nearly 25,000 jobs construction and operational jobs, with an average of 4,950 jobs added per state, and cumulatively generate $3.6 billion in economic benefits. Workers in the five states would directly earn more than $1.3 billion in wages during construction and, once completed, $57 million annually during operation. 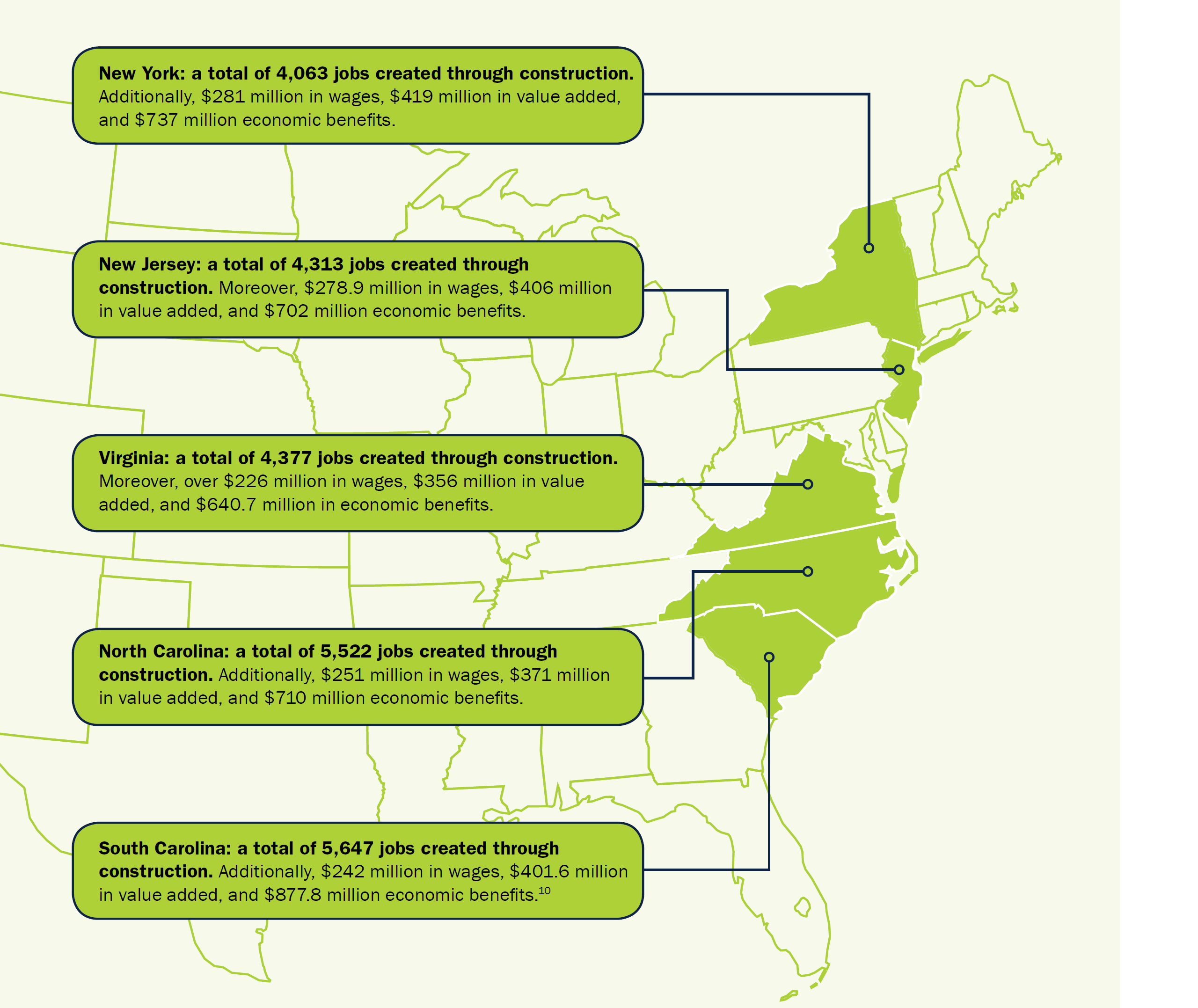 “This report proves offshore wind energy has the potential to add jobs, tax dollars and economic benefits these states while protecting their coastal economies,” said Grant Carlisle, E2 Director of Advocacy. “This is a good deal for states and businesses, bringing in far more investment and tax revenue than the cost of the wind farm – nearly double in some states.”

Beyond the jobs and other economic benefits, the analysis forecasts that construction of an average-sized offshore wind project in each of the five states would generate $265 million in federal taxes and more than $160 million in state and local taxes, cumulatively. Once completed, tax revenue from operating the wind farms in all five states would reach nearly $19 million annually throughout the life of the wind farms.

“While solar, clean vehicles, and energy efficiency continue to prove their importance to American job growth, offshore wind is the next important play, with enormous economic and quality jobs opportunity for the East Coast economy,” said Kit Kennedy, senior director of the Natural Resources Defense Council’s (NRDC) climate and clean energy program. “That’s why it’s exciting that states up and down the East Coast are committing to move forward with big plans for offshore wind development with combined with smart ocean planning.”

E2 is an affiliate of NRDC.

The report, conducted for E2 by BW Research Partnership, also analyzed the potential threat offshore oil and gas development poses to tourism and recreation sectors. This comes as the Trump administration is proposing to open the vast majority of federal coastal waters to expanded offshore drilling. The proposal has been met by vehement opposition, in large part due to drilling’s impacts on coastal economies and residents.  This report confirms these concerns, documenting that just a single month of beach and fishing closures due to an oil spill would cost the five states’ over $2.7 billion in GDP and $1.3 billion in lost wages.

“More drilling puts existing jobs in harm’s way, threatens state economies, and would sacrifice our remaining expanses of healthy oceans,” said Ana Unruh Cohen, Managing Director of Government Affairs at NRDC.  “Instead of foisting this give away on the public, the administration’s drilling plan should be tossed out before it causes lasting harm to America’s oceans and our collective bottom line.”

By comparison, every dollar spent building offshore wind farms would add between $1.52 and $1.83 to each state’s economy without any threat of long-term closures from oil spills.

Cost of One-Month of Beach & Fishing Closures Due to Oil Spill:

More detailed breakdowns of the economic benefits offshore wind would provide to all five Atlantic Coast states – and the economic costs of an oil spill –  can be found at https://www.e2.org/offshore-wind-economic-benefits/.

Tomorrow, the California Air Resources Board (CARB) is expected to adopt the Advanced Clean Cars II (ACII) regulation, which requires all new cars and trucks sold in California to be zero-emission vehicles beginning in 2035. The rule builds on California’s ...