RALEIGH (July 18, 2019) – More than 110,000 North Carolinians now work in clean energy after 3,700 jobs were created in the state in 2018, according to a new analysis of energy jobs data by the national nonpartisan business group E2 (Environmental Entrepreneurs). 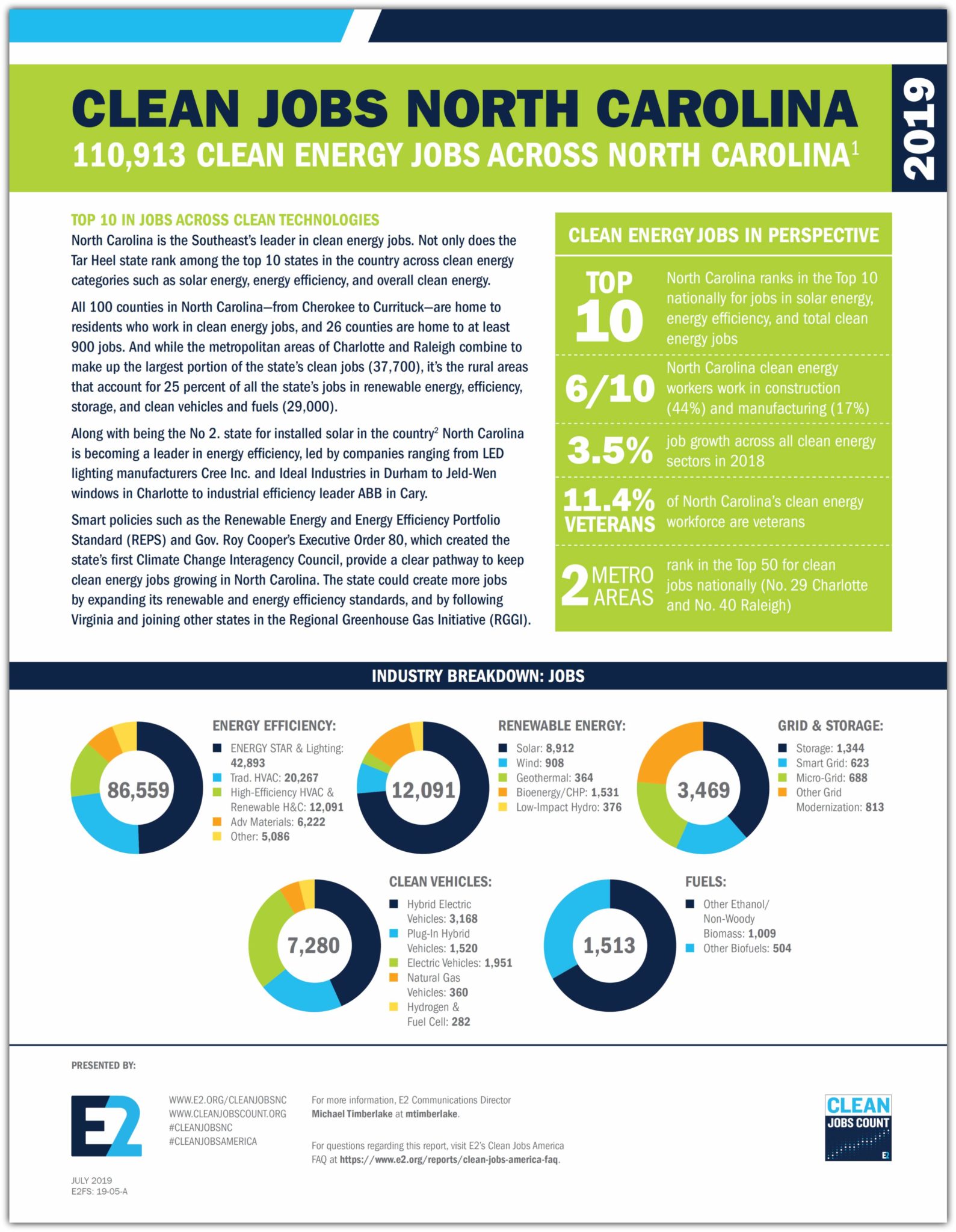 “Just like agriculture, biotech and banking before, clean energy is helping reshape North Carolina’s economy once again – and creating thousands of good-paying jobs along the way,” said Bob Keefe, Executive Director of E2. “Lawmakers now have the opportunity to keep those jobs growing by implementing the right suite of policies that are already in the works.”

“These jobs numbers are proof clean energy solutions will continue to be a worthwhile investment in North Carolina’s economic future,” said Veronica Butcher, E2’s North Carolina Representative. “The advancements highlighted in the report show businesses are creating jobs for North Carolinians that cannot be outsourced while shifting the state to clean energy future.

Analyzing the state geographically, Clean Jobs North Carolina 2019 found that while Charlotte and Raleigh accounted for about one out of every three clean jobs in the state, about 25 percent (29,000) are in rural areas. Additionally, all 100 North Carolina counties are home to some clean energy workers, with 26 counties supporting at least 900. Mecklenburg led all counties in North Carolina with more than 20,142 jobs, followed by Wake (17,491) and Guilford (6,318) counties. By density, Mecklenburg, Wake, and Iredell counties led the state, all support5ing over 20 clean jobs per 1,000 employable residents.

Looking at legislative districts, 11 of North Carolina’s 13 congressional districts supported over 5,000 clean jobs. In the state legislature, 40 of the state’s 50 senate districts along with 39 house districts had over 1,000 clean energy jobs.

Policies such as Gov. Roy Cooper’s Executive Order 80, which sets a framework to expand renewable energy, energy efficiency and electric vehicles, are necessary to keep clean energy jobs growing in the state and prevent them from relocating elsewhere, according to E2. Encouraging more wind and solar development will also help the state stay competitive and create new job opportunities across North Carolina, according to E2’s analysis.

“Thousands of clean energy jobs we currently have in North Carolina today exist because of smart clean energy policies, such as our state’s renewable energy standard,” said Butcher. “Through Executive Order 80 and other steps, we have an opportunity right now for business, finance, and government to work together creatively to expand these sectors while ensuring our workforce has the necessary skills and training to meet the coming demand. The growing global clean energy marketplace needs to see strong policy signals from North Carolina.”

The report follows E2’s Clean Jobs America analysis which found the clean energy jobs account for nearly 3.3 million jobs across all 50 states and the District of Columbia. Both reports are based on data from the 2019 U.S. Energy and Employment Report (USEER) produced by the Energy Futures Initiative (EFI) in partnership with the National Association of State Energy Officials (NASEO). E2 is a partner on the USEER, the fourth installment of the energy survey first released by the Department of Energy in 2016 and subsequently abandoned under the Trump administration.