WASHINGTON – America’s farms were struggling just to make a profit even before the COVID-19 pandemic, but long-ignored soil practices could provide new revenue opportunities and long-term profitability for thousands of hard-hit farms across the U.S., according to a new report from E2 (Environmental Entrepreneurs). The new analysis details why the U.S.’s downturned farm economy — battered by extreme weather and unpredictable growing seasons over the last decade — needs to make carbon farming America’s next cash crop.

With more than half of U.S. farms operating in the red since 2013 and more than 100,000 farms ceasing operations since 2011, Healthy Soils and the Climate Connection: A Path to Economic Recovery on America’s Farms provides a roadmap for how climate-smart agriculture policies could provide profit boosts for farmers and climate wins for advocates. 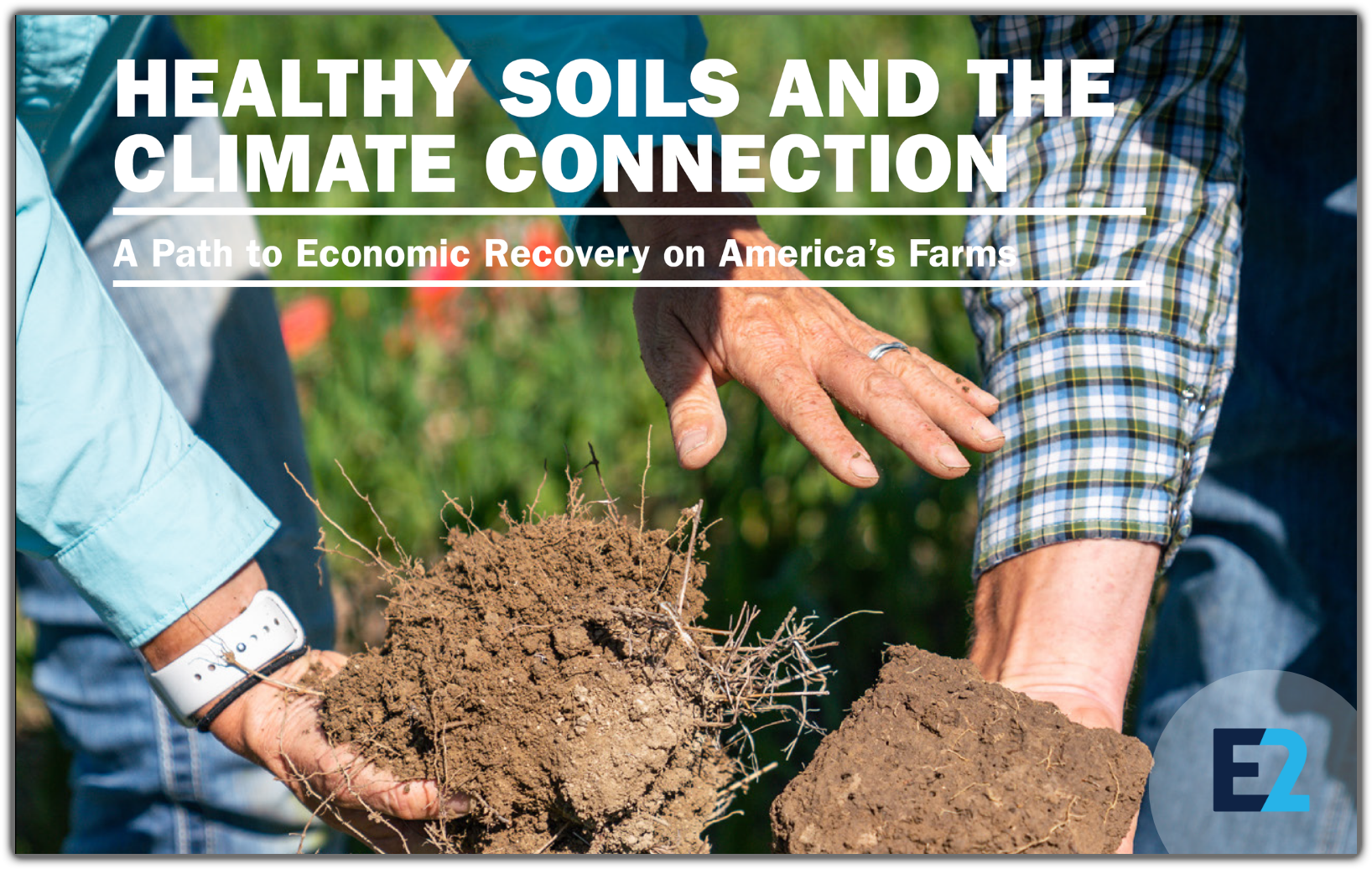 An estimated 1.85 gigatons of carbon dioxide (CO2) per year—roughly the amount emitted annually by the global transportation sector— could be stored globally through regenerative practices.  As an economic opportunity, becoming carbon-negative can open the door for farmers to the marketplace of carbon credits and other financial incentives through farm policy.

“Advancing agricultural practices that store more carbon in the soil is a win-win-win proposition: it’s good for farmers, good for the economy, and good for the environment,” said Nicole Lederer, co-founder and chair of E2.

Some 19.4 million acres of U.S. farmland went unseeded in 2019 as farm debt reached an all-time high of $420 billion in 2020.  According to E2’s latest report, regenerative farming practices  such as cover cropping, crop rotation, and low-till or no-till practices that increase the amount of carbon in soil offer new revenue streams for hard-hit farms. If adopted at scale, such practices could add tens of billions of dollars to the farm economy.

These practices would also be critical to mitigating climate change’s growing economic cost. No country had a higher potential to store carbon than the U.S., according to a 2017 study in the scientific journal Nature.

“President Biden has made it clear that climate action is a top priority in every sector of federal policy, and that agriculture has a key role to play,” said the report’s author, veteran clean-tech reporter and analyst Clint Wilder. “The healthy soil practices and policies outlined in this report can be game changers for removing carbon from the atmosphere and regenerating America’s farm economy.”

“Soil carbon sequestration is not fantasy. It’s science-based biology that we know how to enable and even amplify,” said Chief Agronomist Paul Zorner from Locus Agricultural Solutions. “Incentivizing growers through markets which value that carbon will revolutionize agriculture and its positive contribution to jobs, rural economic stability and global ecosystem health.”

In 2018, E2 assisted alongside Sen. Ron Wyden and a broad bipartisan coalition in crafting a regenerative agriculture pilot program that passed as part of the 2018 Farm Bill. Building on the success of the program, E2 and other allies are now pushing the Vilsack-led USDA to further implement and expand on the program, seen as a major tool for America’s farmers to adapt to and combat climate change, which has taken its toll in the past few years on rural America.