Denver, CO – (June 14, 2018) – More than 57,000 Coloradans now work in clean energy in every county in the state, according to a new analysis of energy jobs data by the national nonpartisan business group E2 (Environmental Entrepreneurs).

Overall clean energy jobs grew slightly to 57,591, up from 55,344, with energy efficiency leading the way with more than  32,000 jobs. Wind and solar energy combined for an additional 15,000 jobs, powering renewable energy in Colorado to rank seventh among all 50 states and the District of Columbia. You can find the latest Clean Jobs Colorado report at www.e2.org/reports/clean-jobs-colorado-2018/.

“Clean jobs count in Colorado,” said Gov. John Hickenlooper, who was on hand for the release of the new report at an E2 Rocky Mountains Chapter event in Denver. “Forging a cleaner, more efficient energy system here in Colorado isn’t just about our environment, it’s about our economy. And it’s no longer just a vision, it’s a reality.” 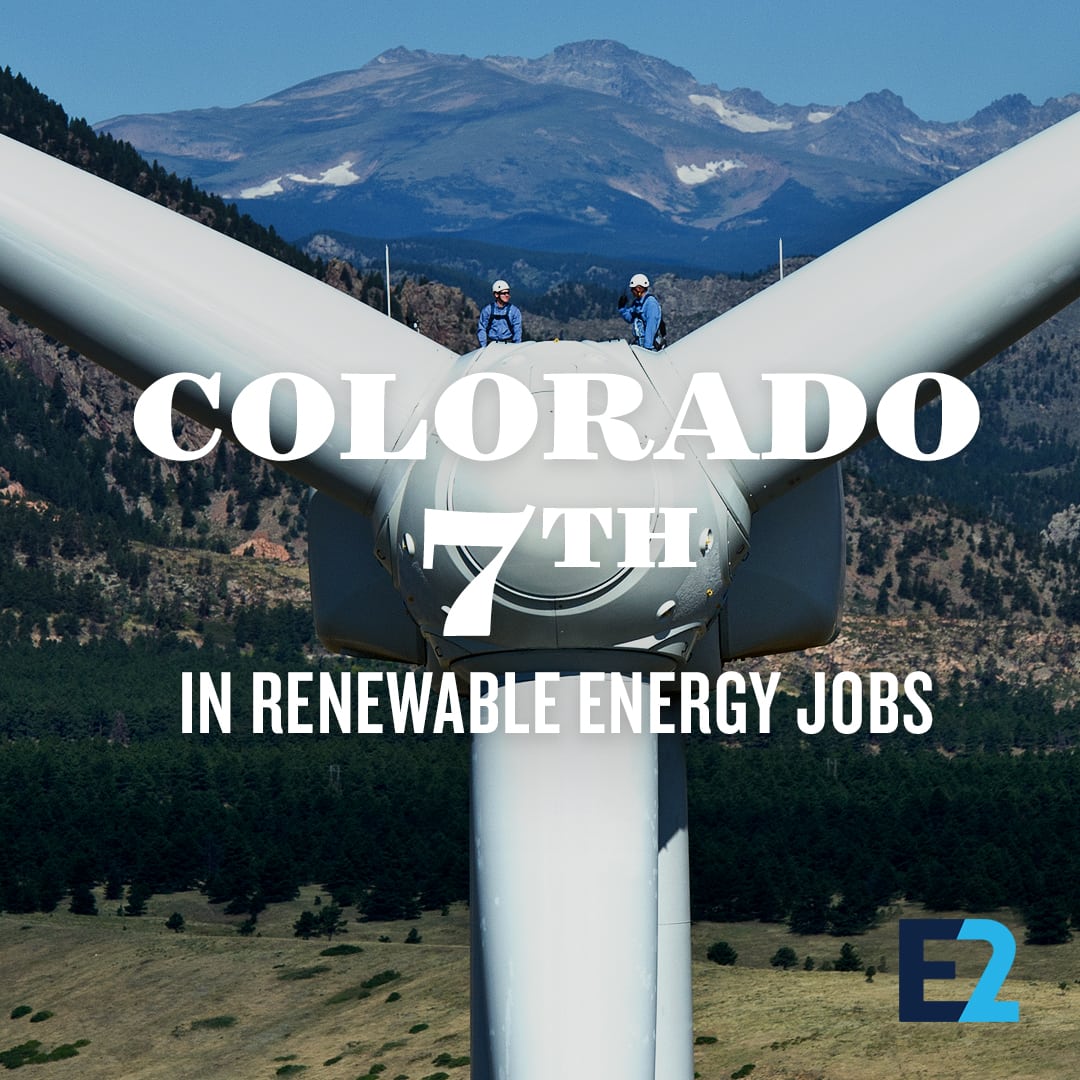 In January, Gov. Hickenlooper announced a broad plan to increase the state’s electric vehicle (EV) market by building out a statewide EV infrastructure network. About 3,000 Coloradans currently work in clean vehicles businesses – a number expected to increase with the expansion of EV charging and other services related to the clean vehicles market.

“We are switching to all EVs because it makes the most economic sense. We cut our maintenance costs in half,  and with creeping fuel prices it’s costing less and less to charge our fleet in our own garage,” said Ryan Kohlman, co-founder of K2 Taxi in Grand Junction. “In just a few years, businesses everywhere will be looking to go electric. The only thing holding back Colorado right now – and the thousands of jobs that come with it – is the lack of a charging infrastructure.”

Denver County led all counties the state with 11,000 jobs at the end of last year. Arapahoe, Jefferson, El Paso, and Adams counties followed, each with more than 5,000 jobs, with Boulder County falling just short at 4,940.

The report is part of E2’s recently launched Clean Jobs Count  campaign designed to to raise awareness of the economic benefits of clean energy in America. Currently, the campaign is running a major digital ad campaign in Denver, Pueblo, and Mesa counties.

“The clean energy sector is growing fast, creating new businesses, and is already one of the biggest job creators in the state,” said Susan Nedell, E2 Rocky Mountains advocate.  “With further investment and a legislature ready  to embrace the opportunity, clean jobs could power Colorado’s economy into the next decade.”

“Energy efficiency is now be embedded into our entire infrastructure,” said Kevin Morse, vice president of Lever Energy Capital in Denver. “These are jobs now essential to everything from constructing new buildings to improving entire energy systems and traffic infrastructure.”

“This report should surprise absolutely no one in Colorado,” said Whitney Painter, owner of Buglet Solar Electric Installation in Golden. “This state’s natural potential for renewable energy is nearly unmatched. If anything, these findings are a wake-up call to businesses and lawmakers that we should be ranked much higher with the resources, workers, and values Coloradans have.”

The jobs analysis expands on data from the 2018 U.S. Energy and Employment Report (USEER) released in May by the National Association of State Energy Officials (NASEO) and Energy Futures Initative (EFI).  E2 is a partner on the USEER, the third installment of the energy survey first released by the U.S. Department of Energy in 2016 but canceled last year by the Trump administration.

To speak with E2 members and other business leaders in your area, please contact Michael Timberlake at (202) 289-2407.

*E2’s 2018 Colorado Clean Jobs report uses a different methodology than previou year’s reports. Prior analysis focused only on clean energy jobs while this year’s report, based on the national US Energy and Employment Report (USEER), uses a comprehensive methodology that focuses on all energy sector jobs. For additional questions on the changes in methodology and how that impact the report’s job findings, visit our FAQ or contact Michael Timberlake (michael@e2.org).